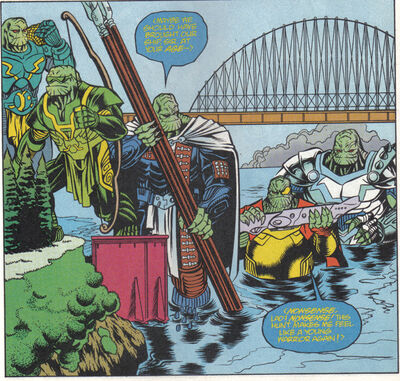 The Dianii were an extraterrestrial race that appeared in Dark Horse Comics' Godzilla, King of the Monsters comic series. They greatly enjoyed hunting larger beasts for sport.

Territory: A number of occupied planets across the galaxy

Speed: At least Superhuman (Can move faster than the human can react, keep up with Godzillas) | N/A | Massively FTL+ (Can travel interstellar distances quickly)

Power Source: Unspecified, but non-descript energy and plasma based

Military Prowess: Nearly all Dianii are extensively trained in combat, with lone hunting groups being made up of upwards of 7 individuals

Weaknesses: They are arrogant and underestimate their prey

Retrieved from "https://vsbattles.fandom.com/wiki/Dianii?oldid=5755202"
Community content is available under CC-BY-SA unless otherwise noted.