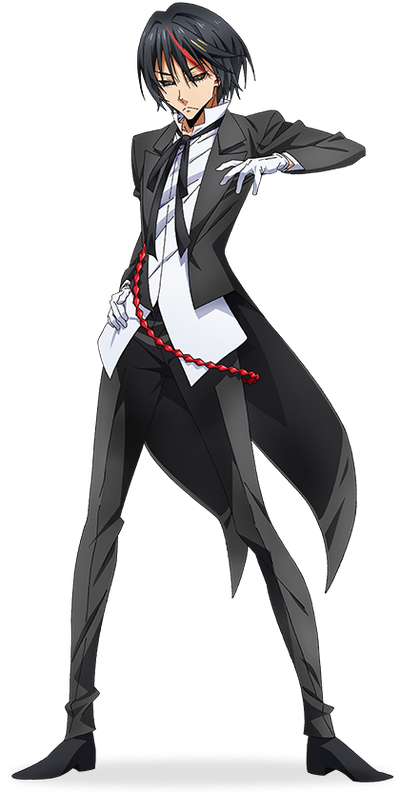 He is one of Rimuru's Twelve Executives and also the current leader and founder of the Black Corps, which is composed of demons.

Among Rimuru's subordinates, he is one of the strongest three individuals, along with Benimaru and Zegion.

Powers and Abilities: Superhuman Physical Characteristics, Automatic Translation, Enhanced Senses, Extrasensory Perception, Fire Manipulation, Darkness Manipulation, Time Stop (Can stop the time of his opponents attacks), Blessed, Energy Manipulation, Telepathy, Self-Sustenance (Types 1, and 2), Immortality (Types 1, 3 and 8; Demons have eternal youth, will regenerate as long as their core which exists within their souls isn't destroyed, and will revive within a few hundred years to a thousand years at most, as long as the Spirit of Darkness exists), Abstract Existence (Type 2; Demons were born as conceptual existences that receive power from the Spirit of Darkness and will revive as long as the Spirit of Darkness exist), Mind Manipulation (Can control the minds of 5 people at the same time), Soul Manipulation (Demons can eat and reap souls), Life and Death Manipulation, Forcefield Creation, Dimensional Travel, Regeneration (Low-Godly, Mid-Godly overtime; Born as a conceptual being without a physical body that receives power from the Spirit of Darkness. Spirits are type 3 concepts as their birth give rise to the existence of their respective element, for example, time never existed until the Spirit of Time was born), Non-Corporeal (Within the demon world, upon entering the human world however demons take on physical bodies), Teleportation, Flight, Reality Warping (Can make illusions become reality), Subjective Reality (Can make illusions become reality, and reality become illusions), Information Analysis (Can analyze his opponents and their abilities just by seeing them), Power Mimicry, Life Manipulation, Existence Erasure, Non-Physical Interaction (Can harm spiritual life forms which exists as souls, fire, water vapor, aura, energy etc), Madness Manipulation, Law Manipulation (Can control the laws of world), Matter Manipulation, Empathic Manipulation (Can cause his opponents to become panicked and if he desires it, can cause them to go insane or die of madness. Diablo used this ability to cause 5 Holy Knights to panic and faint due to their overwhelming fear), Spatial Manipulation, Resurrection (Even if a demon dies they can resurrect within a few hundred years to a thousand years at most), Magic, Shapeshifting, Power Mimicry, Power Nullification (Can nullify the physical attacks of those comparable to him), Unholy Manipulation (Monsters are made of magic energy, which can be purified or warded off by holy energy), Radiation Manipulation and Creation (Monsters of significant aura can create an aura akin to radiation, that is extremely toxic to organic life and can induce death in high concentration. It will cause monsters to be born due to the high concentration of magic energy), Unconventional Resistance to Power Nullification, Power Modification, Power Absorption and Power Mimicry (Skills are inscribed into the soul which resists any outside interference unless the interference is stronger than the soul's defenses, furthermore Unique Skills and above require a strong soul to possess them), Resistance to Soul Manipulation, Mind Manipulation, Fear Manipulation, Sleep Manipulation, Madness Manipulation, Empathic Manipulation, Memory Manipulation (Individuals surpassing A rank have high resistances, and their memories are protected by their soul), Magic (Has an innate resistance to magic), Radiation Manipulation, Disease Manipulation, Corrosion Inducement, Pain Manipulation, Paralysis Inducement, Electricity Manipulation, Poison Manipulation, Ice Manipulation and Fire Manipulation (Has natural effects nullification which makes him resistant to fire and ice), Law Manipulation (Resisted the Shion's Law Manipulation. As a powerful A-rank Disaster monster like Apito, he should be able to resist the effect of Holy Barrier which affects the laws of the world), Fate Manipulation, Information Manipulation (Magic Perception overloads the brain with so much information it would have killed a normal human, but can be used casually), Data Manipulation (The information from Magic Perception is turned into data, which overloads the human brain, but can be used casually), Soul Manipulation and Mind Manipulation (Has an Unique skill so should somewhat resisted Yuuki's mind control from soul manipulation like Hinata which can affect at 350,000 people)

Powers and Abilities: Same as before plus Empathic Manipulation and Madness Manipulation (Which works on the scale of 150,000 people)

Attack Potency: City level (More powerful than Ranga who can create thunderstorm from Death Storm which should require this much energy. Superior to Arch Demons which are stated to be comparable to tactical nukes and could destroy towns. Comparable to Karion whose beast roar can destroy everything within 2km and could physically dent the ground of the arena that can tank a direct hit from a nuclear strike.) | Continent level (Superior to Leon) | Large Star level (Rimuru estimated on one occasion that 3 Guardians on the level of Diablo could handle Milim, and on another occasion that those 3 had a chance of defeating Chloe. So while inferior to Milim and Chloe, Diablo is somewhat comparable. Can get 2x stronger with Ultimate Form)

Speed: Hypersonic+ with Relativistic reaction speed (Comparable to Shion) | Relativistic+ (Superior to Leon) | FTL (Comparable to Chloe) with Massively FTL+ reaction speed (Because of Thought acceleration his thought processing capability is accelerated by a million to ten million times, which allows him to react to things he normally wouldn't be able to perceive), and Massively FTL+ with Time Control (Can control the flow of time with Time Control, which allows the user to stop time and move a 1 million times normal speed while in stopped time)

Durability: City level | Continent level | Large Star level, Difficult to hard due to his multi-dimensional barrier which make use of dimensional gaps

Stamina: High | Very High (Should be comparable to other demon lords who can fight for days on end without getting tired) | Very High

Standard Equipment: Bladed Claw Scissors: Scissors which reaps all lives, however, it was destroyed in his fight with Benimaru.