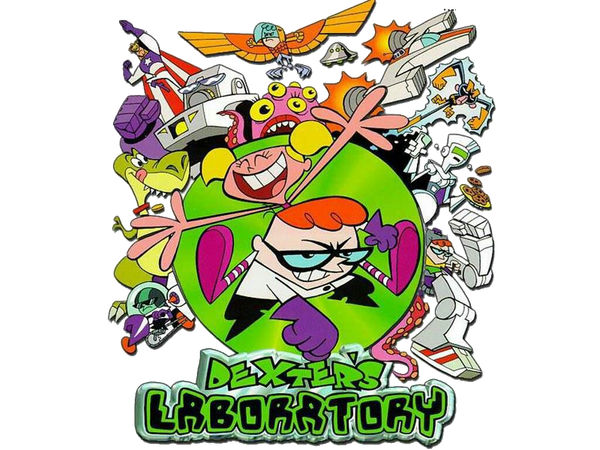 For detailed information about this series, visit the Dexter's Laboratory Wiki.

Dexter's Laboratory (commonly abbreviated as Dexter's Lab) is an American comic science fiction animated television series created by Genndy Tartakovsky for Cartoon Network, and the first of the network's Cartoon Cartoons. The series follows Dexter, a boy-genius and inventor with a secret laboratory, who constantly battles his sister Dee Dee in an attempt to keep her out of the lab. He also engages in a bitter rivalry with his neighbor and fellow-genius Mandark.

The series revolves around Dexter, a bespectacled boy-genius who possesses a secret laboratory hidden behind a bookcase in his bedroom. The laboratory is filled with Dexter's inventions and can be accessed by speaking various passwords or by activating hidden switches on Dexter's bookshelf (e.g. pulling out a specific book). Though highly intelligent, Dexter often fails at what he has set out to do when he becomes overexcited and makes careless choices. Although he comes from a typical all-American family, Dexter speaks with a thick accent of indeterminate origin.

Dexter manages to keep the lab a secret from his clueless, cheerful Mom (Kath Soucie) and Dad (Jeff Bennett), who never take notice of it. However, he is frequently in conflict with his hyperactive older sister, Dee Dee. In spite of Dexter's advanced technology, Dee Dee eludes all manner of security, and once inside her brother's laboratory, she delights in playing haphazardly, often wreaking havoc with his inventions. Though seemingly dim-witted, Dee Dee often outsmarts her brother and even gives him helpful advice. For his part, Dexter, though annoyed by his intrusive sibling, feels a reluctant affection for her and will come to her defense if she is imperiled.

Dexter invents several devices including spaceships that are capable of travelling faster than the speed of light, time machines, giant robots, etc. Their are quite a few weapons and even characters capable of destroying entire planets and more. Many characters are capable of flying and fighting at relativistic speeds with a variety of hax powers.

Barbequor
Add a photo to this gallery

Retrieved from "https://vsbattles.fandom.com/wiki/Dexter%27s_Laboratory?oldid=7022547"
Community content is available under CC-BY-SA unless otherwise noted.