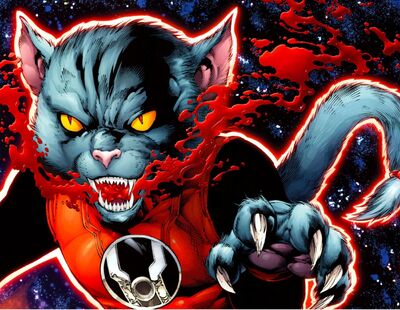 Dex-Starr is a house cat from the planet Earth who is among the deadliest of the Red Lantern Corps. He was given his ring after a series of events that resulted in seeing his owner killed and being found in an alley and put in a bag to be thrown off a bridge. His mission is to find his owner's killer.

Intelligence: Low. He is in fact, just a normal cat.

Weaknesses: Any Red Lantern will suffer from power loss when fighting a Blue Lantern or an Indigo Lantern. Unable to control its rage.