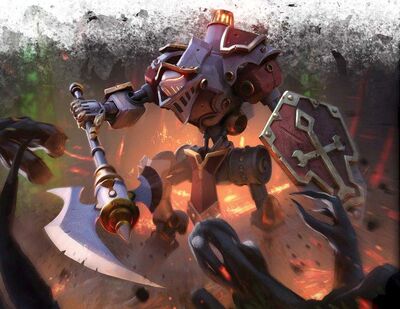 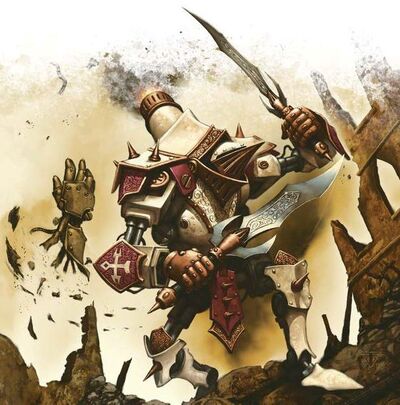 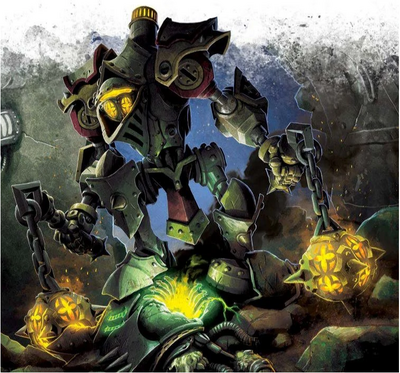 The Devout Chassis was made by the Protectorate of Menoth to be a bodyguard for its warcasters and high ranking priests, in an attempt to replace the paladins that the Priesthood couldn't control. Its variants are the Dervish high-speed melee warjack and the Purifier that uses trails of flame to hinder enemy movements and to clear out enemy troops with bursts of fire.

Attack Potency: Multi-City Block level (As a light warjack, it should be on par with warcasters like Severius)

Speed: Supersonic+ Reaction speed (On par with characters that can react to a lightning strike)

Stamina: Above average (As a Light warjack, it can fight for 90 minutes before it burns through all its coal supply)

Standard Equipment: Pole Axe, and Great Shield (As Devout), Pair of Dervish Swords (As Dervish), pair of Immolators (As Purifier)

Intelligence: Below Average, higher with a warcaster

Weaknesses: Being a warjack, if it's warcaster is knocked out or killed it shuts down

Retrieved from "https://vsbattles.fandom.com/wiki/Devout_Chassis?oldid=5802452"
Community content is available under CC-BY-SA unless otherwise noted.