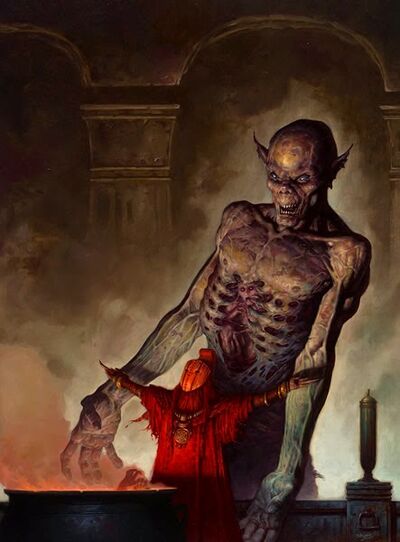 Devourers are massive undead that stalk the ethereal and astral planes, looking for travelers. The Devourer absorbs the souls of those it stalks, used to sustain their own unnatural life. They are also known for their grotesque features- they form a miniature of their latest victim's soul, trapped within their otherwise empty chest cavity.

Powers and Abilities: Superhuman Physical Characteristics, Abstract Existence (Type 1, Originates from the Outer Planes, marking them as purely abstract), Large Size (Type 0), Soul Manipulation (Can absorb and devour the souls of enemies after drawing them out), Absorption, Damage Transferal (Can shift the effects of certain spells to the souls it has absorbed, instead damaging them), Mind Manipulation via Confusion, Necromancy, Paralysis Inducement via Ghoul Touch, Summoning, Statistics Reduction via Ray of Enfeeblement, Telekinesis via Spectral Hand, Extrasensory Perception via True Seeing, Energy Manipulation (Capable of drawing out the positive energy that constitutes the soul of living creatures), Self-Sustenance (Types 1, 2, and 3), Immortality (Types 1 and 7), Non-Physical Interaction (Magic can affect abstract, incorporeal, intangible, conceptual, or nonexistent beings),

Stamina: Infinite, Undead can act indefinitely with no rest, fuel, or oxygen

Intelligence: Genius, vastly above and beyond the average human's level of knowledge, on the level of gifted mages

Weaknesses: Loses access to many spells if it lacks souls

Retrieved from "https://vsbattles.fandom.com/wiki/Devourer_(Dungeons_and_Dragons)?oldid=5876574"
Community content is available under CC-BY-SA unless otherwise noted.