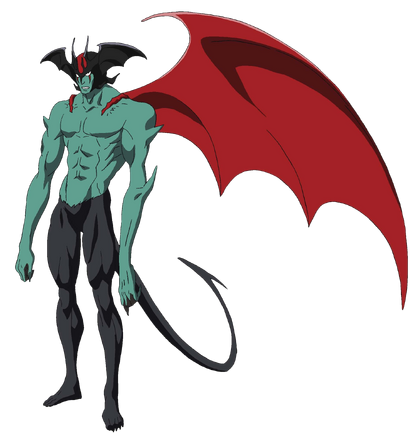 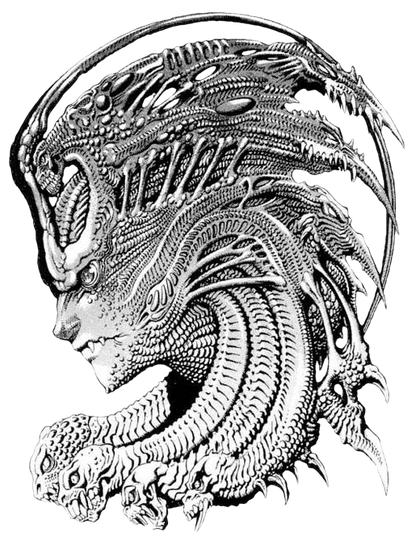 Akira Fudo (不動 明, Fudō Akira) is the human who becomes the eponymous Devilman. Originally passive and weak-willed, Akira was convinced by his friend Ryo Asuka to take in the demon Amon into him. Formally an albino humanoid from an unrecorded chapter of history, Amon was a warrior raised by the harpy-like Sirene tribe before he and the tribe's sole surviving member were employed as demon hunters under Lucifer. But when Lucifer declared his rebellion against heaven upon learning the truth of the demons, Amon was betrayed by his employer as he was force-fused with a dragon and a werewolf. This results in Amon's hatred towards Lucifer, now known as Satan, and motivated him to later assimilate an ancient demon of great power prior to being contained.

When Amon was placed inside Akira's body, the human's pure heart allowed him to maintain his sense of self while Amon was buried within his host's subconscious. As the first Devilman, Akira made it his goal to protect humanity from the hordes of demons raising after centuries of hiding to wipe out the human race. But as Akira slowly descends to despair from the trials and tribulations that heavily affect him, it enables Amon to slowly take control of his host body as Armageddon draws near.

Classification: Human, Demon, Angel, Devilman, The Other side of Satan

Superhuman Physical Characteristics, Enhanced Senses (All his senses is far superior to human), High hand-to-hand combat skills, Weapon Mastery (Skilled combatant on knifes and swords), Vehicular Mastery (Extreme bike riding skills), Fear Inducement, Charismatic Persuasion, Aura, Acausality (Type 1; Can seemingly mess with the past without any consequences), Telekinesis, Telepathy, Sleep Inducement (Can put people to sleep), Memory Manipulation (Can casually erase people's memory), Mind Manipulation (Can see and hear people's thoughts), Precognition (Can anticipate danger in battle), Energy Blasts (He can fire energy blasts from his mouth, eyes, hands, etc. Some of them are even invisible), Intangibility, Fusionism (He can fuse organic and non-organic matter, affecting even abstract and non-corporeal entities with mere thought), Body Control (Can use every part of his body as a weapon), Transformation (Can modify his body by absorbing energy from opponents), Instantaneous Teleportation, Flight, Giant form, Forcefield Creation, Life Manipulation (Can raise the dead), Time Travel (Can go back in time) Electricity Manipulation (Devilman can shoot thin bolts of electricity from his antenna, hands and much more powerful from his whole body), Weather Manipulation (Can freely summon a tornado, create a lightning storm and much more), Regeneration (Low-Mid; Able to regenerate his arm), Matter Manipulation (Can сhange the shape of objects via molecular control), Creation (Can freely create organic or inorganic matter via control of the molecular field), Portal Creation/BFR, Soul Manipulation (He has the ability to hit souls and enter into them), Astral Projection, Earth Manipulation (Able to summon earthquakes), Illusion Creation (He can create very realistic illusions that can even be felt), Breaking the Fourth Wall (Warned about how dark the manga plot was going to be and knows that it is fiction), Power Bestowal (He gave his avatars strength and additional abilities), Summoning (Can summon his avatars), Resurrection (For other people only), Limited Reality Warping (Only when he's in Hell), Summoning (Can summon his avatars), Bone Manipulation, Non-Physical Interaction (Can interact with intangible or non-corporeal beings), Resistance to Possession, Fusionism, Empathic Manipulation (Resisted the effects of merging with Amon), Fire Manipulation (Absolutely immune to attacks of this type), Electricity Manipulation (He didn't get affected by the Skull King's lightning attacks), Portal Creation/BFR (Treated portals sucking him like they are nothing), Telepathy (He didn't know that he was subconsciously resisting telepathy until he was reminded of it), Precognition (His future cannot be seen, even by a powerful telepaths), Telekinesis (He was not affected by attacks from a very powerful telekinetic), Biological Manipulation (Able to go back to normal after Amon bonded with his cells on an atomic level), Mind Control (Resisted Amon taking over his mind), Existence Erasure, Void Manipulation and Reality Warping (Satan couldn't manipulate and turn the entire world he created to nothingness because of Jack, which in this context is likely an universe)

Same as before but appears to be far stronger, along with the ability to survive in the vacuum of space, and has Shapeshifting (Can freely reshape the form of his body), Interdimensional Travel (Can casually travel between various dimensions), Healing, Ice Manipulation (Can create ice), Fire Manipulation (Has shown the ability to breathe and shoot fire), Light Manipulation (Is able to use rays of light from his hands and also from his whole body to burn things), Danmaku (Can produce several energy blast at a time), Vibration Manipulation (Can create shockwaves), Sound Manipulation (Can create sonic waves), Invulnerability with Devil Shine (Immune to physical attacks, when using this ability), Non-Corporeal (Can exist regardless of any physical body or form, as long as he retains his own will), Immortality (Types 1, 2, 3, 5, 6, 8 and 9. Exists independently from normal life or death, as long as he retains his own will. As an idea, as long as idea that is "Amon", still exists, he cannot truly die. Has his "will" exist in hell), Regeneration (Mid-Godly; Recovered after God erased the existence of all life on earth, recreating the world of genesis in the process), Space-Time Manipulation (Can create and sustain tears in space and time), Pocket Reality Manipulation (Upscaled from Satan who has his own pocket dimension), Durability Negation with many of his abilities, Resurrection Negation (Can obliterate life in such a way that it cannot be restored), Enhanced BFR (Can lock his enemies in Hell), Energy Manipulation (Can manipulate the energy of an opponent, such as spiritual, magical, heavenly, hellish, etcetera), Absorption (Able to absorb energy in battle to increase his own power), Power Absorption (Able to absorb the abilities and powers of the enemy, threatening even the beings of divine origin), Adaptation (Can adapt to enemy attacks during a battle), Statistics Amplification (Able to raise his statistics during fights by absorbing energy from opponents), Power Nullification (Able to nullify an enemy's powers by absorbing their energy), Limited Hellfire Manipulation (Freely uses it only in Hell), Acausality (Type 2 and 4; Exists in only single point of time, not having any past or future selves, remembered his memories after universe was rewritten. Stated by Persophone that demons such as Devilman are defying logical laws of causality), Possession (Demons have the ability to possess humans), Limited Invisibility (Only when he is just a will), Duplication (Duplicated himself to three separate entities), Self-Resurrection (Capable of resurrecting by possession, seems to have extra life for both Akira and Amon), Absorption (Able to absorb other lifeforms), Dream Manipulation (Able to create dreams for other people), Multiple Personalities (Jacks are separate entities just like Akira and Amon), Heat Manipulation (Able to increase his temperatures or his surroundings), Biological Manipulation (Managed to affect the bodies of the humans who used him, he is also able to bond with their cells on an atomic level), Limited Empathic Manipulation (Can drive humans emotional after being absorbed by them), Attack Reflection (Able to create a barrier that reflects certain type of attacks), Conceptual Existence (Type 2; He is a living, personified idea made up by the imagination of humans), High Resistance to Pain (Can survive lethal injuries and fight even with fatal wounds, without needing to heal from it), Heat (Devilman has withstood the scorching temperatures of lava unscathed), Hellfire Manipulation (While in Hell Akira had no problems withstanding attacks of this type), Radiation Manipulation (He withstood nuclear explosions without any repercussions whatsoever), Illusion Creation (Can see through very convincing illusions), Space-Time Changes (Attacks powerful enough to warp the entire earth didn't work on him), Fate Manipulation (He defied the events within a time loop and created a new temporal axis with a new history), Power Absorption (Demons' powers cannot be absorbed by the ones who are weaker than them), Life Manipulation (He isn't technically alive), Vibration Manipulation (Tanked Vulva's powerful shockwaves), Physics Manipulation (He isn't bound by common sense of 3-D space), Law Manipulation (Angels, Demons, Titans and other supernatural creations of God are immune to the normal laws of the physical universe), Chaos Manipulation and Mind Manipulation (Demons are part of human unconscious, connected to their past, present, future and selves before the physical universe)

Attack Potency: At least Town level (Created an earthquake of an "unprecedented scale" to destroy El Dorado, meaning it should be superior to a common magnitude 6.0 which accounts for 20% of earthquakes in Japan) | At least Planet level, likely far higher (Defeated both Satan and Zennon in the Violence Jack timeline). Most of his attacks ignore conventional durability

Speed: At least Hypersonic (Comparable to Cutie Honey) with Massively Hypersonic+ attack speed (Jack is able to project natural lightning) | At least Sub-Relativistic (Returned from space to Earth's surface in a short period of time) with FTL reactions/attack speed (Fast enough to dodge and react to one of Satan's lasers, which was 1.2x faster than the speed of light)  | Immeasurable (Able to keep up with Satan, who can freely move through time and space and move normally in extra-dimensional spaces such as Netherworld and Hell)

Range: Hundreds of Kilometers (Able to reach the whole El Dorado and Kanto easily) | Low Multiversal (Able to reach other universes such as spiritual universe with ease)

Intelligence: Above Average. Being very inventive and quick-witted in battle, Akira had some of the best grades in his classes and had impressive intellect, partly due to the fact that he spent most time reading. | Extremely High (Demonstrates a full knowledge about the structure of Heaven and Hell)

Note: Before creating VS threads for Devilman, the creator must consider which mindset Devilman is in, either Akira mindset (who uses physical strength rather than abilities) or Amon mindset (who uses a lot of his durability negating abilities from the start). The character has a huge difference in fighting style depending on which the creator picks. 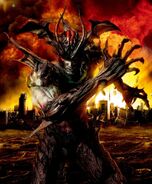 Jackaholic
Add a photo to this gallery