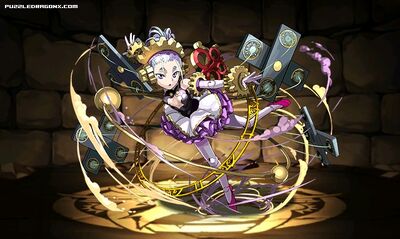 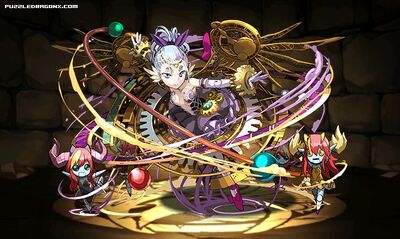 Deus ex Machina is a machine god who was created to battle during the great war between humans and dragons. She befriended a young girl during the war, and fought alongside her against the Dragon King, but was defeated and forced to shut down and recover while her new friend was killed.

In a new era, Deus ex Machina rebooted at the same time that the Orange Dragonbound, Saria was born. Realizing that Saria was Deux ex Machina's old friend reincarnated, she stayed by her side to watch her grow, and eventually fight by her side.

Intelligence: Above Average (Designed for battle, has done battle with several notable foes like the Dragon King and Zuoh)

Retrieved from "https://vsbattles.fandom.com/wiki/Deus_ex_Machina_(Puzzle_and_Dragons)?oldid=5932329"
Community content is available under CC-BY-SA unless otherwise noted.