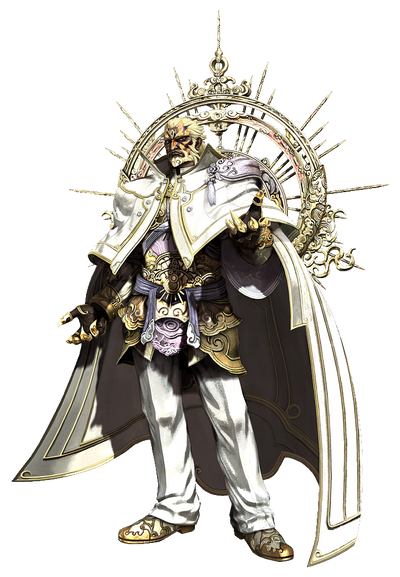 Deus (デウス, Deusu) is the Leader of the Seven Deities and the most powerful of them. He was the former leader of the Eight Guardian Generals and the current ruler of Shinkoku. Deus is one of the main villains of Asura's Wrath, having killed Emperor Strada and orchestrated Asura's downfall at the start of the game. His Mantra Affinity being Pride, Deus is extremely arrogant, tyrannical and power-hungry, relentlessly advancing on his crusade to beat fate and stablish a new order in the Cosmos.

Powers and Abilities: Superhuman Physical Characteristics, Flight and Levitation, Lightning Manipulation and Projection, Telekinesis, Teleportation, Master Martial Artist and nunchaku user, Energy Blasts, Immortality (Types 1 and 4), Regeneration (At least Mid-Low), Potentially Large Size (Type 6, can merge himself with the Karma Fortress, which is a massive fortress almost half as large as The Sun), Self-Sustenance (Types 1 and 2 normally, 3 as Sakra Devanam Indra Deus. Can survive in space), Resistance to Extreme Cold and Cosmic Radiations

Attack Potency: At least Large Planet level (Was overpowering both Asura and Yasha at the same time during Asura's Wrath episode 17, stronger than Augus wielding the Wailing Dark, who fought him in the past) | Large Star level (Merged with the Karma Fortress, absorbing all of its power, and performed the Messatsu; kept up with Vajra Yasha and Six-Armed Asura before the latter grew more enraged and powerful to match and defeat him)

Speed: Sub-Relativistic (Faster than Asura and Yasha during Asura's Wrath episode 17, should be able to be around the same level as Augus) with FTL combat and reaction speed (Could keep without any problem with Asura and Yasha who are able to dodge Vlitra's lasers at this speed) | Sub-Relativistic with FTL combat and reaction speed

Lifting Strength: At least Class Z (Overpowered Asura) | At least Pre-Stellar (The complete Karma Fortress would possess such strength through size alone; Deus would be capable of the same, wielding the entirety of its power within his own Mantra)

Durability: At least Large Planet level (A full-powered strike from Vajra Yasha did nothing to him, who beforehand had just defeated Wrath Asura) | Large Star level (Took many blows from Vajra Yasha and Six-Armed Asura)

Intelligence: Gifted. Very intelligent as the leader of the Seven Deities, orchestrated the death of Emperor Strada and Asura's downfall to further his plans.