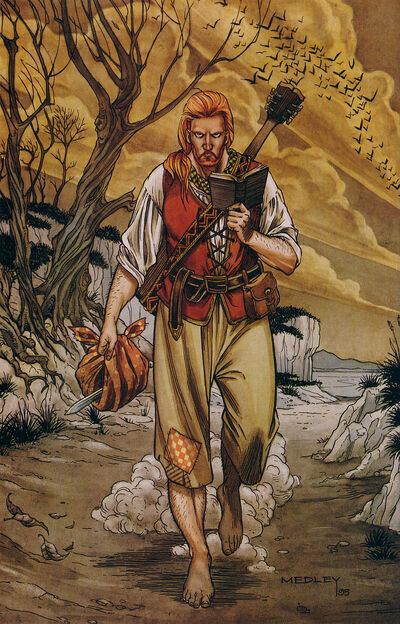 Destruction was already envisioned in the mind of Neil Gaiman early on in the writing of The Sandman series, but as for actually making an appearance, that was several years down the road. For quite some time Destruction was merely known as "The Prodigal", spoken of but never seen nor truly explained. He is in a way the most obscure of all The Endless, and by them considered the most foolish of the siblings, as he abandoned his post as Destruction several hundred years ago. Yet it seems that absence from life as Destruction has made him much wiser when it comes to understanding The Endless and their functions.

Destruction's attitude is that of a very gentle giant, ironic because his duty is to destroy, and perhaps exactly the reason he refused to destroy any longer. His placement in the family is also perfect, as the middle child, seeing as while his elder siblings may look down upon him or see the abandonment of his function as a measure of his youth (except perhaps Death), his younger siblings (Despair and Delirium specifically) seem to adore him and look up to him, they need him, yet he refuses to stay for their sake's. Though he does not abandon for the sake of spite and leaves Barnabas to take care of Del in his stead, he also counseled the second Dream after the death of Morpheus. However, he would not stay to speak with his siblings and has made it very clear that under no circumstances does he ever want them to seek him out (for those who seek out Destruction, will find it aplenty in their lives, usually resulting in death). It appears that after the tales told in The Sandman this attitude changed and he proved himself to be the loving brother once again as he returns to take care of Delirium after she went through something terrible beyond imagining, proving that he cares for her more than he does for his own solitude.

Name: Destruction of the Endless, Olethros

Gender: Inapplicable, appears as a Male

Age: As Old as the concept of Destruction

Attack Potency: Outerverse level (All members of the Endless are the primal truths which compose every aspect of The Presence's creation, which contains 1-A realms such as Limbo, the Monitor Sphere and the Source Wall)

Speed: Nigh-Omnipresent (Being the conceptual embodiment of destruction, he is everywhere that destruction takes place within creation)

Range: Irrelevant (Can reach into the void outside Creation)

Weaknesses: Destruction of the Endless is bound by complex customs and traditions, and cannot spill the blood of a family member.

Start a Discussion Discussions about Destruction of the Endless