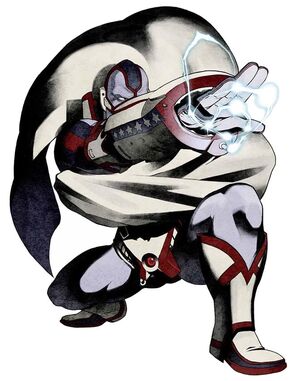 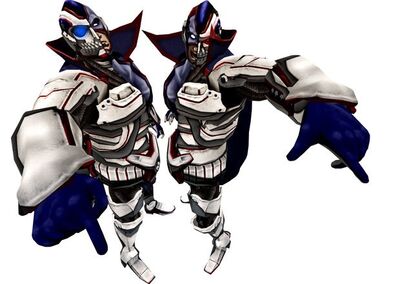 Destroyman is recurring Boss in the No More Heroes series. He is known mostly for his cheap tactics and the fact that he cosplays a superhero. His suit, makes him technologically superpowered allowing him to do things no normal person would such as shoot lightning or fire lasers from his crotch (and yes, he actually fires lasers from his crotch).He was formerly the 7th ranked assassin from the first game but ended up being sliced vertically in half by Travis. As the 8th ranked assassin in the sequel, Destroyman becomes not one, but 2 Cyborgs. Both of which have a mechanical aspect compensating for their missing halves. Their personalities seem to have split too as one is polite and the other is rude.

Powers and Abilities: Superhuman Physical Characteristics, Electricity Manipulation (Can shoot lightning from his hands and can focus this energy to condensed balls of energy), Energy Projection (Can fire lasers from his ears and crotch), Flight (Can fly with the help of machinery), Cyborgization, Weapon Mastery

Speed: Transonic (Able to keep up with early game Travis) | Massively Hypersonic+ (Can keep up with NMH2 Shinobu)

Standard Equipment: SFX Converter (The name of his weapon that allows him to transform)

Weaknesses: Destroyman likes to toy with his opponents and fights dirty most of the time. However, this makes him cocky. He also says Destroy at the beginning of his attack and since this isn't Shounen, then people can figure out when he's going to attack.