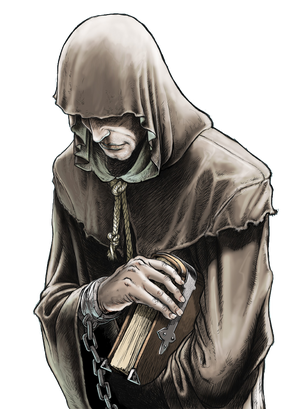 Although Destiny is considered one of The Endless, unlike the rest of his siblings, it was not always that way within the comic book world, in fact he was making appearances in the comic book universe long before Neil Gaiman was a household name or The Endless even a concept put in print. In early comic book encyclopedias he was even stated to have no siblings to speak of which has since been retconned through The Sandman. Now, he is seen as the eldest of The Endless, for when existence first came into being, it had a destiny, and as such he has always been around since the beginning of it all.

Whether this makes him that much older than any of his siblings is uncertain but he is seen as The Eldest. Destiny is - like many characters that know the future and that it cannot be changed - very stoic in going about his life and rarely, if ever, shows any emotion. He is not a very warm and welcoming type of guy because he simply reads the Book of Destiny and does what it says he shall do. This attitude is basically a double-sided blade, as on one hand it means he never purposefully invokes hatred or emotions of that sort, while at the same time he never purposefully brings about joy either, he just does as the Book says he shall do.

Thus, in terms of relationships with his siblings, he hardly has any to speak of, he likes to keep to himself, although he also seems to be the one most willing to respect Destruction abandoning his duties, most likely because he felt no attachment to his brother. Also, at Morpheus' wake, Destiny delivers the first speech being the eldest and seems to feel no pain at the loss. He says that the ceremony is to pay their respects to Dream, and than, to ultimately forget him. For Destiny sees things as they were, as they are, and as they shall be...and the way he sees things, Dream was the lord of things that were not, things that are not, and things that will never be. In short, you could basically say Destiny is heartless, incapable of understanding emotion because he has no need to feel when he knows all.

Name: Destiny of the Endless

Gender: Inapplicable. Appears as a male

Age: Predates Creation (Was already tracking the Word before it was even spoken aloud by the Voice)

Attack Potency: Outerverse level (All members of the Endless are the primal truths which compose every aspect of The Presence's creation, which contains 1-A realms such as Limbo, the Monitor Sphere and the Source Wall. His realm is the loom on which the fabric of all existence is weaved, and his book contains all of existence within it. He has the same nature and affinity as The Basanos and is the source of their power. Destiny has been implied to be the personification and the side effect of The Presence's deterministic approach on creation, with his book being based on the script written by the Presence. Reading aloud from the Book makes the book a part of the story it tells which will cause a disaster as severe as the one caused by Presence's abdication. The Book has no separate existence from Destiny, and not even Michael can forcefully take it away from him)

Speed: Nigh-Omnipresent (Embodies Destiny itself, a concept that pervades through all existence)

Range: Irrelevant (He can reach into the void outside of Creation)

Intelligence: Nigh-Omniscient (Knows the fate of everyone, even the likes of Lucifer. However, a few specific things elude him, such as key pieces of knowledge possessed by Delirium, or the full extent of The Presence's plan)

Weaknesses: Is bound by complex customs and traditions, cannot spill the blood of a family member.

Start a Discussion Discussions about Destiny of the Endless