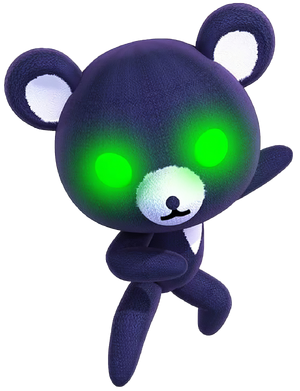 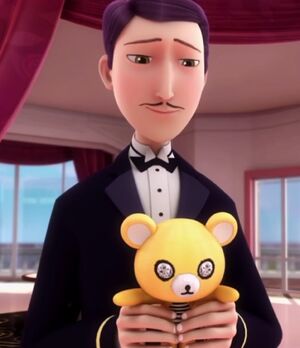 Jean is an employee at Le Grand Paris who likes to encourage Chloé’s best traits.

In "Despair Bear", after being fired by Chloé Bourgeois, he is akumatized by Hawk Moth into Despair Bear, a supervillain who controls a small teddy bear.

Superhuman Physical Characteristics, Body Puppetry, Mind Manipulation (Able to control the movement and actions of those who he gets attached to), minor Memory Manipulation (Those controlled by him are unable to recall what they did under that state), Immortality (Type 2 to the teddy bear. Type 6 by himself), Inorganic Physiology (Type 1 to the teddy bear), Small Size (Type 1 to the teddy bear. Type 2 by himself), Surface Scaling, Stealth Mastery; Duplication, Paralysis Inducement, Power Bestowal, Possession and Corruption (If his Akuma isn’t purified after being defeated, it would start to multiply into many more Akumas and infect different persons, turning them into Despair Bears that would remain immobile until Jean gets Re-Akumatized)

Attack Potency: Wall level | Unknown (Unlike most of Akumas, Despair Bear doesn’t appears to possess the physical aptitude to fight evenly against Ladybug and Cat Noir), likely Wall level (Regardless of the aforementioned, as an Akumatized Villian, he should still be stronger than Gorilla, who could punch a hole a in a wall)

Speed: Unknown | Supersonic+ with Massively Hypersonic+ combat and reaction speed (Should be comparable to The Mime)

Weaknesses: None Notable | If Despair Bear it’s destroyed, he will lose his powers. If his Akuma is purified after being defeated, he won’t be able to duplicate

Retrieved from "https://vsbattles.fandom.com/wiki/Despair_Bear?oldid=5991115"
Community content is available under CC-BY-SA unless otherwise noted.