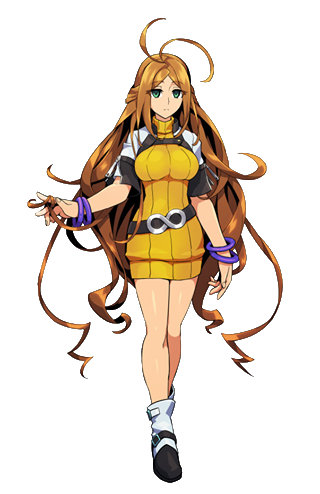 Desna was born into a wealthy Russian family. She was famed for her beauty and fortune telling, until one day due to the increasing discrimination against those with septima her family restricted her to the house for her own safety. She then got a message from the stars telling her to travel across the world and act as a guide to oppressed adepts. She then did so, amassing a massive following, many of her followers even considering her a goddess. She eventually received a message in her dreams telling her to join Eden. She did so, becoming a member of The Seven.

Powers and Abilities: Superhuman Physical Characteristics, Hair Manipulation, Precognition (Both via the stars and in dreams, allowing her to see months in advance, though not in too much detail. Her predictions have always been accurate), limited Air Manipulation (Can create a tornado that pulls in a target), can ignore Elemental Intangibility with Entangled Strands

Lifting Strength: Unknown physically, at least Athletic Human with hair (Is able to lift herself off of the ground with relative ease)

Stamina: Very High (Should be comparable to other adepts on her level)

Range: Standard Melee Range. At least a hundred Kilometers with hair (Able to easily stretch it across an entire space station and orbital elevator)

Standard Equipment: Her Grimor, a book that can amplify her septima that can be summoned at any time.

Intelligence: Above average. Leads a large portion of Eden as a member of The Seven.

Weaknesses: Her predictions lack detail and are usually not useful in combat. Otherwise nothing notable.