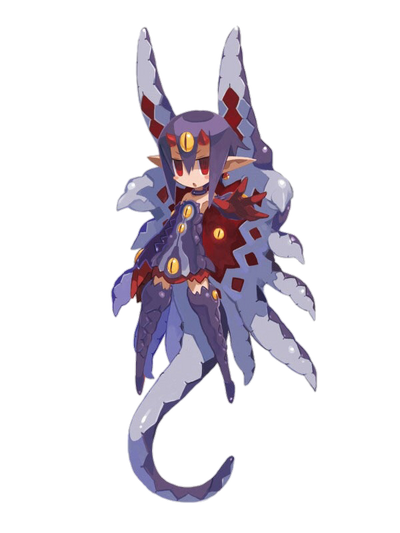 Once upon a time, a little girl named Fuka asked her father to have a little sister with advanced functionalities strong enough to help her take over the world. Several years later... The Prototype known as the "Death/Extermination Submersible Combat Organism" was born (Desco for short). Unfrotunately after DES X was created she ended up being abandoned and was sent to Hades where she was locked up under high security.

She was later released by Axel, thinking that he could control her. Unfortunately Desco takes out Axel in one shot to show how "Final-Boss like" she is and proceeded to fight Valvatorez, Fenrich, and Fuka (the latter being Desco's Illegitimate Big sister (spoilers))

After being defeated, Valvatorez decides to bring her Desco along. She now trains under Valvatorez to achieve her dream to become a "Final Boss". One that'll be able to help Fuka take over the world.

Standard Equipment: Octorabbit (This can be removed and summoned at any time and can transform into a sword)

Intelligence: Average (Talks in the third person when referring to herself)

Weaknesses: Despite Desco's destructive power, she still has a lot to learn so she isn't at her full potential. She also cares for Fuka a lot, so much in fact that she'll do anything to be by her side. Such as overreacting at the fact that Fuka might disappear which caused her to replicate creating an evil clone known as "Torn Desco", who took over the netherworld to build a "Big Sis Dream Land".

Retrieved from "https://vsbattles.fandom.com/wiki/Desco?oldid=5916306"
Community content is available under CC-BY-SA unless otherwise noted.