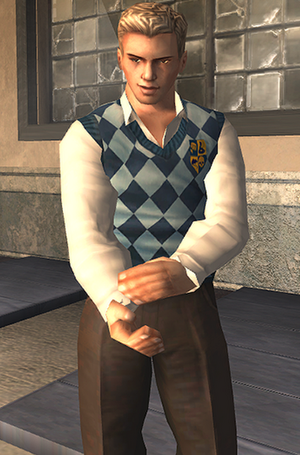 Derby is a character in Bully, and is the leader of the Preps. Derby is arrogant, snobbish and mean-spirited even by Preppy standards. He berated Bif Taylor after he lost a boxing match against Jimmy Hopkins. He's also a master manipulator, however, unlike Gary he has no interest in running the school. Whereas the other clique leaders apparently come to like Jimmy, Derby never loses his contemptuous manner, nor does he ever treat Jimmy with respect unless threatened or forced to. Although betrothed to his cousin, Pinky, he no-shows a date with her. Derby apparently has had an affair with his nanny in his past, but was caught and beaten for it by his father.

Speed: Peak Human with Superhuman combat and reaction speed (Should be on par with Jimmy; was able to dodge his punches)

Intelligence: Average (He is the leader of his own gang, and is also a skilled manipulator. He was even able to trick Jimmy into betraying the Greasers)

Weaknesses: He is extremely arrogant and will only fight when he has no other choice.

Retrieved from "https://vsbattles.fandom.com/wiki/Derby_Harrington?oldid=4344413"
Community content is available under CC-BY-SA unless otherwise noted.