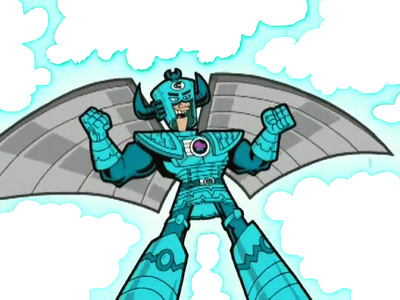 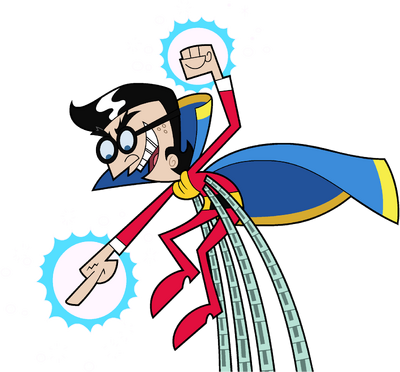 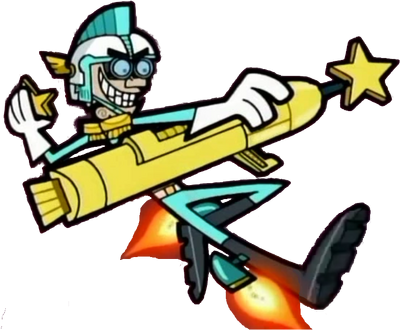 Denzel Quincy Crocker, better known only as Mr. Crocker, is Timmy Turner's mentally unstable school teacher and his most recurring foe. As a child, Crocker once had Timmy's fairy godparents, Cosmo and Wanda, but inadvertently lost them after an incident in March of 1972. Due to lingering memories of his time with them, Crocker is obsessed with proving the existence of Fairy GodParents, which has led to conflict with Timmy on numerous occasions.

Superhuman Durability at his peak, Genius Intelligence, Toon Force, Regeneration (Mid-High. Was blasted by a gigantic laser and reduced to ashes, seconds later he was perfectly fine[1]. Also decapitated, lacerated and mauled in other episodes and unharmed seconds afterwards), Immortality (Type 2 & 3), Body Control (When saying "Fairy Godparents" or other things while feeling altered, he may detach parts of his body and put them together where they belong while doing violent movements), Acrobatics (Casually made several flips upon meeting Norm[2]), Weapon Mastery, Hacking, Social Influencing (Learned how to communicate with cows and made many of them his personal army[3]), Information Analysis (Via "generic tracking devise" & Magic Detectors), Resistance to Electricity Manipulation (Survived getting electrocuted by an electric chair he made, previously stating that Timmy's parents would not survive it if they wouldn't Fairies[4]. Albeit he was briefly shown fried with dead skin afterwards), Magic/Reality Warping (Stated to have an anti-magic shirt and clothes, which Timmy used to escape a magic cage off-screen)

As before, Energy Manipulation, Can block mind reading with anti-mind reading helmet (Initially it severely hindered his mobility, eventually he was shown walking fine with it), Clairvoyance (Fairy finder), Portal Creation & Teleportation (Created a portal to Fairy World. Timmy end up teleported there upon entering in it), Can drain Magic with numerous gadgets (Such as his magic blaster, in which he caught Cosmo, Wanda & Poof to harness their magic and grant his own wishes), Extended Information Analysis (Via magic sensors. Could sense high magic activity and no life in a moon of another planet with his technology), Spaceflight (Via Crocker rocket), Ice Manipulation (Fairy freezer)

Superhuman Flight Speed, Reality Warping via Magic, Self-Sustenance (Type 1. Must be activated manually), Flight & Spaceflight (Can levitate on his own and fly with his wings), Teleportation, Statistics Amplification (Implied to have used magic to improve his physicality), Transmutation, Homing Attack, Elemental Manipulation, Creation, Mind Manipulation, Weather Manipulation, Absorption (Absorbed Cosmo into his scepter to harness his power, also reducing his size and removing his improved physicality), Portal Creation, Time Travel, Size Manipulation (Created portals with vortexes to suck his opponent in. They have lead to space, the ancient Egypt and the sub-atomic inside of a pencil, making Timmy and Crocker of that size), Life Manipulation, Forcefield Creation, Sealing (Trapped Timmy's parents in an energy bubble), Has access to all the powers Timmy has due to Fairy Magic (Has only demonstrated using the listed before), Mathematics Manipulation, Causality Manipulation (While never used, claimed that math means nothing in a world with fairies and magic, and that a fairy could make "2 + 2 = fish", which was then affirmed by Cosmo and later reaffirmed by Timmy as something Crocker was now able to do. Was also aware that history means nothing as a fairy could change it), Resistance to the powers Magic has in the verse (His luminous armor & staff were presumably created by his magic, he also previously stated to get the proper equipment to be in his current position after capturing Timmy's fairies; Timmy stated that "magic can't affect other magical items" before using Santa's magic bag to protect himself from Crocker warping the world and manipulating everyone's mind, Timmy also had everything magic still working afterwards. Calamitous created a magical, yet otherwise regular desk to hide behind it and avoid being destroyed by a bomb that would blow up the universe and tear & revert time[5] Crocker's armor & staff should have this resistance, and he can also create things with it)

Mechanical tentacles on his Back (Which can stretch, be use offensively & for improved mobility), Magic, Flight, possibly Teleportation (Seemingly first appeared by teleporting), F Projection, Can create bubbles of "anti-magical energy" to seal beings in them, Fire Manipulation

Same as in base, plus Reality Warping via Magic, Transmutation, Earth Manipulation, Flight, Has access to all the powers Timmy has due to Fairy Magic (Has only demonstrated using the listed before. As his second time with Fairy Magic, he should be willing to use the same powers he used in Abra-Catastrophe!, although he doesn't keep memory of those events), Resistance to the powers Magic has in the verse for his magical weapons and suit

Attack Potency: Human level, higher with weaponry | Universe level via Magic/Reality Warping (Captured Wanda and later Cosmo and in his scepter to harness their power. Fought Fairy Versery Gifts Timmy, who could harm him when Crocker survived hits from an amped Cosmo, who overpowered his magic only powered by Wanda), able to negate durability in many ways | City Block level (One of his tentacles isn't mechanical and they should all be comparable to each other; Using one of them he restricted Cleft, who is nearly on par with the Crimson Chin and can harm his enemies. With a single blast of magic coming from his tentacles, he defeated Matter Muncher Lad, who withstood Bull-E ramming into him, who in turn could harm Cleft and all super friends at once), able to negate durability with anti-magical bubbles | Human level by himself, Universe level via Magic/Reality Warping (Uses the magical weapons of Fairy Armory, a guarded militaristic facility in Fairy World that has its own power supply, unlike other magic in that place; As such, those weapons should be notably more powerful than normal Fairies like Cosmo & Wanda. Stated that he's able to "force the unconditional surrender of Fairy World and demand to make [him] king of all Fairies" even without resorting to make all Fairies powerless, which he did to ensure his objective, this would put him above Jorgen and likely The Fairy Council), able to negate durability in many ways

Speed: Normal Human | Normal Human speed, likely far higher (Kept up with Fairy Versery Gifts Timmy, who outran, reacted and dodged his magic on several occasions), Subsonic flight speed (Travelled from a portal and quickly trapped Timmy's parents right before his arrival), FTL attack speed with magic | Massively FTL (Should be on par with The Nega-Chin. Overwhelmed Cleft with his attacks) | Normal Human, FTL attack speed with magic, Massively FTL+ flight speed (The flight provided by the rockets of his militaristic suit should achieve at least equal speeds than a Fairy's natural flight)

Durability: Varies from Human level too much higher at his peak (Withstood being smashed by his second anti-mind reading, which left a hole in the floor just by falling. Casually resisted being thrown dozens of meters, twice. Survived unaffected after being hit by "a huge lava flow". Withstood a laser stated to be able to blow up a house. Survived being crushed by a gigantic arch and a boulder. Survived being inside a fake black hole) | Universe level (Traded blows with Fairy Versery Gifts Timmy, who claimed to be just as powerful as Crocker due to his use of magical items. Survived hits from an amped Cosmo, who overpowered his magic) | At least Human level, likely City Block level (Had his tentacles cut by a normal human throwing an ax at them, however, the rest of his team with comparable power and speed was also defeated by normal humans, which was suggested to be due to The Writer controlling existence and making good triumph over evil) | Universe level (His militaristic suit should be notably more durable than regular magical items, which can withstand serious magical attacks even when not designed to be particularly durable)

Stamina: Very high. A very energetic person with a surreal pain tolerance, even when truly harmed. He didn't said anything after having his body crushed by an elephant[6]

Range: Standard melee range, higher with weaponry | Extended melee range with his scepter, Low Multiversal with magic (Fairy magic can reach the entire universe, other points in time and make things happen in other universes, although it can't travel to other universes with sheer speed or affect the space between them. Shirley, a being created from Cosmo & Wanda's magic, was able to create vacuums that were automatically expanding and were going to destroy the 2 universes in which they were after about 2 days, even with Shirley being in his own universe) | Extended melee range, tens of meters with energy projection | Standard melee range physically, Low Multiversal via Magic

Standard Equipment: Anti-magic clothes, Magic Detector(s), a "generic tracking devise" (Which informs the location of other if it has a sample of its DNA. Also informing weight, height and other stuff about the target) and weapons | A scepter | Mechanical tentacles | Magical weapons and a suit he stole from Fairy Armory.

Intelligence: Extraordinary Genius. Crocker's obsession with Fairy Godparents has left him unhinged, devoting every second he can to finding, capturing, and proving their existence. This has made him an expert on the magical world, regularly utilizing their weakness against butterfly nets and developing numerous gadgets to hunt them down and drain their powers with a meager budget. Has invented devices capable of: Sensing Fairy magic & where it's being used, detecting invisible kids[7], blocking mind reading thoughts[8], draining magic, etc. Creaded impressive technology such as a computer virus that can hack into other people's computers and record footage of Fairies & seek and destroy other viruses, a functional portal to Fairy World, and a gadget to harness magic from Fairies to grant his wishes, a space rocket, technology to detect life on other planetoids, and a gadget to quickly freeze targets. Constructed the Crocker Cave, a secret laboratory with futuristic technology

Weaknesses: Crocker is mentally unstable due to his constant obsession of fairies, Crocker is clumsy, irritable, and impatient. He is often arrogant and short-sighted when he has the upper hand | As before. Theoretically unable to break Da Rules (Note that non-canon rules and interpretations of them are used instead of all of them being properly listed in the Fairlyoddparents wiki). He presumably can't use most of his magic without his scepter, although he has shown to use his transmutation by just snapping his fingers by the end of the movie. | As the first key

Crocker as a kid

The effects of Crocker's waves, before affecting the whole world

Crocker cut into pieces by Poof.