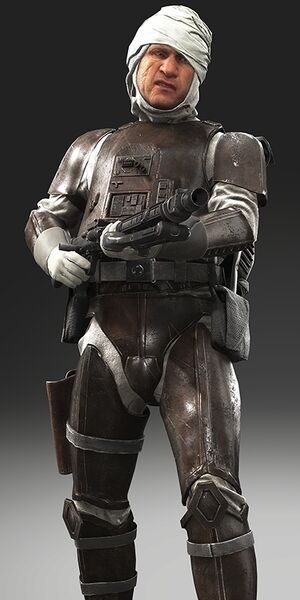 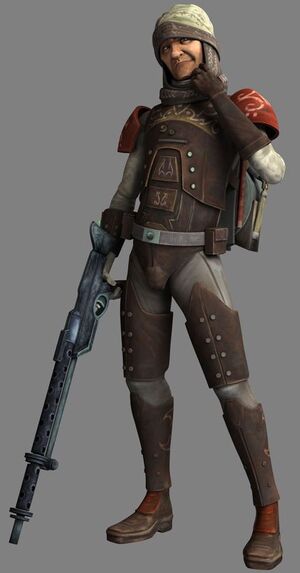 Dengar was a human male bounty hunter from Corellia. He was active in the galaxy from the Clone Wars era of 22 to 19 BBY up till the end of the Galactic Civil War in 5 ABY, at which point, he chose to retire. He often worked with the female Zabrak bounty hunter Sugi and had even formed a close friendship with her niece Jas Emari. He also often worked with Boba Fett and was even considered his rival.

Tier: 9-B physically. 9-A with vibroknife. 9-A with blasters. High 8-C with heavy weapons and explosives

Age: Unknown. Presumably in his 20s during the Clone Wars as he was stated to be in his physical prime at this point. This would put him in his 40s to at most early 50s as of retirement.

Attack Potency: Wall level physically (Has punched an injured Chewbacca through a wall). Small Building level with vibroknife (Can cut characters/armours with this level of durability, also ignores conventional durability to an extent). Small Building level with blasters (His DLT-19, being a heavy blaster rifle, is far more powerful than blaster carbines such as these; also carries a DT-12 heavy blaster pistol, which should pack this kind of firepower). Large Building level+ with heavy weapons and explosives

Speed: At least Peak Human (Can keep up with and go toe to toe in melee combat with Kage Warriors, who are noted to be quite fast & agile compared to humans)

Durability: Wall level himself (Should be able to withstand the forces of his own physical strikes. Completely uninjured from a fall of several storeys out of a train moving at high speed. Has been bashed in the face with a rock by an injured & drugged Chewbacca and was only more angered than hurt). Likely Large Building level+ with his armour (Known to wear high quality plated armour of a custom make. Said armour allowed him to survive a Class-A thermal detonator explosion)

Range: Melee range with vibroknife, dozens of metres with blaster pistol and grenades, potentially a few kilometres with his heavy blaster rifle.

Intelligence: Fairly High. Dengar is masterful with all sorts of weapons, a highly skilled martial artist, can be quite cunning in battle, a skilled tracker and hunter, skilled with laying traps, overall an extremely dangerous and skilled combatant who was considered a rival to and even held in high regard by Boba Fett.

Weaknesses: His anger can sometimes get the better of him and lead him to making rash decisions, such as rushing a target and forgetting to watch his surroundings.

Retrieved from "https://vsbattles.fandom.com/wiki/Dengar?oldid=6371773"
Community content is available under CC-BY-SA unless otherwise noted.