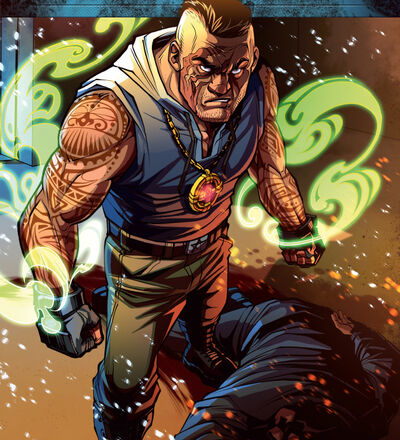 Demonslayer is a grim avenger who exterminates fiends with the power of living tattoos, made from Satan's blood. Together with the cynical renegade imp called Sneak he tracks down and annihilates demons, trying to hold back the infernal invasion. He is the main protagonist of the comic book series with the same name, published by Bubble Comics.

Attack Potency: Small Building level (Should be capable of harming demons with durability in the same level as his own)

Lifting Strength: Class 50 (Can lift and turn over a 30-ton truck)

Weaknesses: Friends and loved ones who may be threatened

Symbiotic Tattoos — Demonslayer is armed with mystical tattoos that give him demonic power. This gives Demonslayer superpowers: