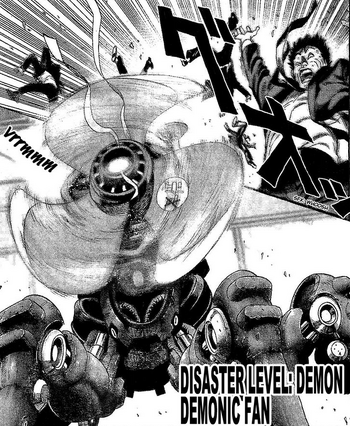 Demonic Fan (扇風鬼, Senpūki) was a Mysterious Being of unknown origin that appears to be a sentient robotic fan.

The Demonic Fan is a four-legged, big, metallic structure. Each leg has two joints, similar to a spider and connecting each leg, is a robotic device with a giant fan attached. The fan has three blades and spins at high velocity. It is an incredibly powerful and durable machine whose Disaster Level is marked as Demon, indicating that it is fully capable of destroying a city on its own. It was able to overwhelm the entire Blizzard Group including Fubuki.

Powers and Abilities: Superhuman Physical Characteristics, Air Manipulation, Capable of re-assembling by itself

Attack Potency: City Block level (As a Demon level threat should be superior to Kombu Infinity)

Stamina: Very high (Is a machine and can virtually never exhaust)

Weaknesses: His re-assembly can be overpowered with sufficient force

Retrieved from "https://vsbattles.fandom.com/wiki/Demonic_Fan?oldid=5924608"
Community content is available under CC-BY-SA unless otherwise noted.