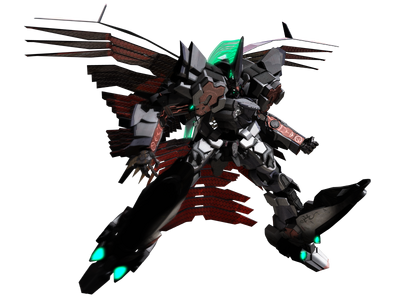 Powers and Abilities: Superhuman Physical Characteristics, Magic, Barrier Creation (Can defend against physical, mental, spiritual and conceptual attacks), Teleportation via the Imaginary Catapult (Can teleport by manipulating quantum probability), able to warp space-time and gravity for additional speed and mobility via Timaeus and Critias (Performing physically impossible maneuvers like jumping without a solid surface beneath its legs), can trap multiple targets in a highly reinforced net via Atlach-Nacha, Large Size (Type 1), Illusion Creation via Mirror of Nitocris, Space-Time Manipulation (Can shatter space-time via Atlantis Strike), Energy Blasts, Fire and Ice Manipulation via Cthugha and Ithaqua, Heat Manipulation via Lemuria Impact (Can trap a target in a field and bombard them with the heat of the Big Bang), Can attack on a Mental, Spiritual and Conceptual level with Magick (Is powered by Magick, which can affect one on a spiritual, mental and conceptual level) | All prior abilities plus Regeneration (At least Low-Mid, can regenerate a missing arm), Levitation and Flight, Statistics Amplification (Can boost its speed via Shantak), Time Travel via Timaeus and Critias (Capable of brief time trave to attack the target in the near-future), Attack Reflection via Mirror of Nitocris (able to deflect energy blasts and lasers), Black Hole Creation with Lemuria Impact | Same as before in addition to Absorption, Sealing and Barrier Generation with the Shining Trapezohedron (The mere act of summoning this weapon distorts time and space. It also protects its user from harm by generating a barrier around them that disintegrates whatever that may potentially harm its wielder. Anything struck it is also sealed inside it)

Attack Potency: Multi-City Block level (Kicked Doctor West's Super West Destroyer Robot No. 28 Special through countless buildings), City level with Lemuria Impact (If Lemuria Impact were to go out of control, it would have destroyed all of Arkham City), Island level with Cthugha (Kurou believes Cthugha is powerful enough to turn Arkham City to ash) | City level (Demonbane's punches are now more powerful than a nuclear bomb), possibly Island level (Could fight on equal terms with Dagon who's mere roars are capable of shaking an entire island alongside being heavy enough that its own mass can easily make the island tremble. When using Cthugha powers, he managed to bring ruin to the entire island) | Universe level (Destroyed an entire universe in its clash with Liber Legis. Therion described his and Liber Legis' battle with Kurou and Demonbane as one that would destroy every world they reached across space and time), Multiverse level+ with Shining Trapezohedron (Can turn infinite parallel universes into a barrier to seal the opponent , and can also be used to create and destroy new ones) | Multiverse level+ (Absorbed the energy of two Shining Trapezohedrons and broke free of Nyarlathotep's Klein Bottle)

Speed: Massively Hypersonic (At least Mach 750+, capable of deflecting volleys of shots from 100 Vulcan Guns at once) | Relativistic+ (Able to dodge lasers fired from Legacy of Gold) | FTL ( Surpassed the speed of light in its battle with Liber Legis and exchanged billions of blows with it during the fight. Should be superior to Black Lodge Sorcerers) | At least FTL, possibly higher

Durability: Multi-City Block level, City level with barriers (Survived the force of a Lemuria Impact that went somewhat out of control) | City level, likely higher with barriers | Universe level (Could withstand attacks from Liber Legis) | Universe level, possibly Multiverse level+ (While it absorbed the Shining Trapezohedrons, it left him in a near-death state after one attack)

Stamina: Limitless (Due to being a robot and drawing infinite energy from Cor Leonis)

Intelligence: N/A (Lacks a sentient mind due to being a robot, though its pilots, Kurou Daijuuji and Al Azif possess very extensive magic skills)

Weaknesses: Demonbane is unable to teleport without the Imaginary Expansion Catapult | It can only contain the combined energies of the Shining Trapezohedrons for a few minutes, and unleashing theirenergies will drain Demonbane of its power almost immediately, rendering it an inoperable husk for an extended period of time.