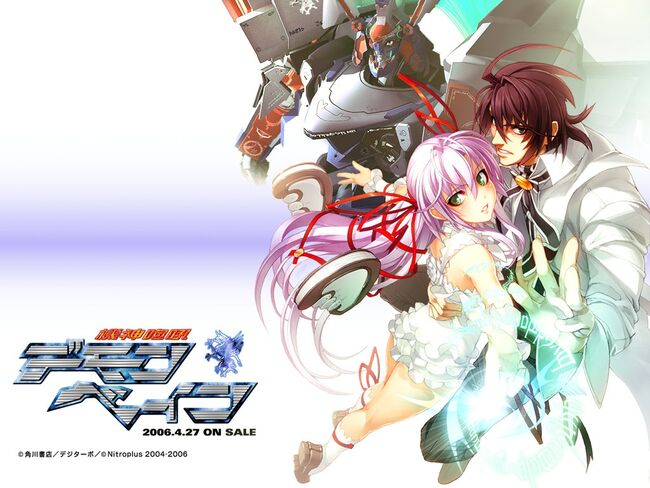 Demonbane is a series of 6 novels and 2 visual novels by Nitro+ with mecha and Cthulhu Mythos elements. In 2006 a 12 episode anime titled Kishin Houkou Demonbane was aired. The anime is basically a retelling of the first visual novel Zanmataisei Demonbane with many things cut out or changed.

The series focuses on a young man Kurou Daijuji, who once studied magic at the Miskatonic University but later quit due to a certain incident and opened a small detective agency. One day he receives a job from Ruri Hadou, the young head of the Hadou Financial Group, to find a powerful grimoire.

On his search Kurou meets (or rather she falls on top of him) a girl named Al Azif, who turns out to be the Necronomicon - the most powerful grimoire. This fateful encounter changes Kurou's life forever...

Demonbane can be considered an incredibly powerful franchise and rather strong for a visual novel. The setting features gods and creatures heavily inspired by the Cthulhu Mythos, including Outer Gods, Elder Gods and the Great Old Ones, as well as powerful mecha with many potent abilities including Reality Warping, Time Manipulation, Causality Manipulation, the ability to summon infinite amount of copies of oneself and many others. The verse also has extremely powerful weapons such as the Shining Trapezohedron, which is capable of overpowering, banishing, and sealing multiversal gods and entities

Humans are at the lowest level of power in the setting, though some humans are capable of wielding great power on their own and these are known as Sorcerers. With their magical power, they obtain superhuman capabilities as well as various powers such as Spatial Manipulation, Time Manipulation, Reality & Dream Manipulation, Gravity Manipulation, Mind Manipulation, Matter Manipulation at it's lowest and most focused level, Existence Erasure and even Concept Manipulation. Putting simply, "Magic" is the art of controlling the information that composes an object, and therefore shaping / distorting said object. In Demonbane, all things that make up reality as a whole, be them physical, ethereal or even conceptual, hold the same origin in one primordial element, called 'Azathoth.' By wielding and shaping the 'Azathoth', mages wield and shape reality itself on a conceptual level.

There are also the creations called "Deus Machinas", which are essentially giant Mechs capable of replicating, channeling and amplifying magical power. To pilot them, sorcerers require the assistance of powerful Grimoires who in Demonbane tend to attain sentience and a physical form due to the amount of magical energy they contain.

Finally, the Outer Gods are the most powerful beings in the setting with one amongst them, Nyarlathotep, being capable of creating structures such as Klein Bottles, which are time-looped universes that create a new space-time with each loop, resulting in self contained multiverses with infinite parallel space-time continua. Elder Gods, despite being significantly inferior are still unfathomably above regular Deus Machinas, being able to destroy universes in their battles.

For more thorough information about the series, please see our Demonbane Explanation Page.

Retrieved from "https://vsbattles.fandom.com/wiki/Demonbane_(Verse)?oldid=6502674"
Community content is available under CC-BY-SA unless otherwise noted.