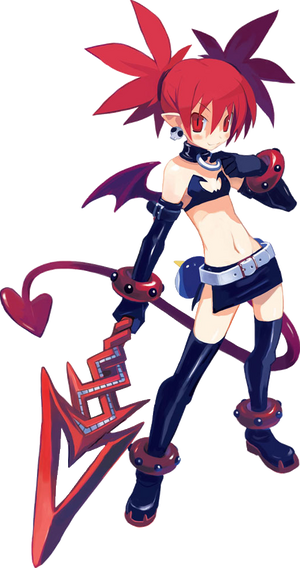 Carefree and mischievous, Etna is the leader of the Prinny Squad and one of the few vassals still loyal to Laharl. While she is the only of Laharl's vassals who rejoin him in combat when he awakens, she also is revealed over time to be keeping some secrets...

Attack Potency: Solar System level, possibly higher (Is comparable to Laharl, Who can destroyer every star in the sky) | Galaxy level (Should be stronger then the Flora Beast who can do this, and those that can use Galaxy Comet) | Multiverse level+ (Stated as "Clearly having the power level of an Overlord" by Fake Zenon. Stronger than Darkdeath Evilman; should be almost as strong as, if not equal to, Overlord Laharl)

Standard Equipment: Varying axes, spears, her fists, a hammer, guns (wields the spear Longinus in several of her appearances)

Intelligence: Like Laharl, Etna is skilled in both hand-to-hand combatant and the use of weapons, specializing in the use of axes and spears as well as magic, and is skilled with guns as well. She is also arguably Laharl's most competent vassal, as he was forced to subsist off canned tuna once she left and took the Prinnys with her during the events of Disgaea 2. It is also heavily implied that she is the only reason why his court remains together and even manages to assassinate Laharl and Flonne to take control in one of the bad endings.

Weaknesses: Etna is greedy, can sometimes act a bit vain, may not take seemingly weak foes/actions that would waste her time seriously, and is easily angered if mocked for being "flat."