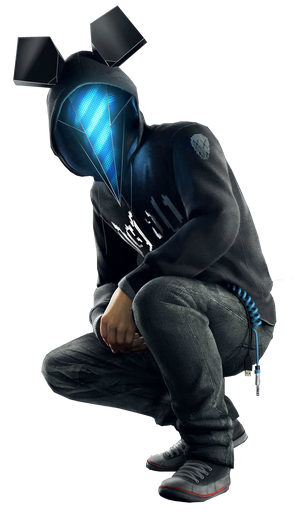 Defalt is a disc jockey who works in Dot ConneXion at Ambrose Theatre, and a blackhat hacker for hire who works against DedSec. He seeks revenge against Raymond Kenney (a.k.a T-Bone) for having voluntarily killed his brother by causing the Northeast Blackout of 2003.

Age: Likely in his late 20s

Powers and Abilities: Genius Intelligence, Very Skilled in Psychological Warfare and Manipulation, Hacking, Preparation, Vast resources (Has the resources to hire many Fixers who are well equipped), Vehicular Mastery, Limited Sound Manipulation (Via his mask, which allows him to hide his voice)

Attack Potency: Unknown physically, Unknown via Hacking (Can hack everything connected to the ctOS in Chicago, to the point he can actually send messages to his enemies through others' phone, alter their ctOS profiles as he wishes, control police scanners, Steam Pipes and Bridges and even hack the Brunker's and Aiden Pearce's Profiler systems without any difficulties)

Standard Equipment: His Mask, His Phone, Computers, His Rosewood car

Intelligence: Genius. Defalt is an extremely skilled hacker to the point Raymond Kenney and Clara Lille are actually aware of his abilities with T-Bone even calling him "brilliant". Even Aiden Pearce and Dermot "Lucky" Quinn were impressed by how potent and dangerous he is. His hacking skills are so high that he became one of the potential recruits of DedSec and one of their strongest enemies after they rejected him. He is also very well-versed in strategy, using a decoy to fool Aiden Pearce with ease and set up a complex and rather efficient plan to get revenge on Ray for the death of his brother while torturing him with the consequences of his actions.

Weaknesses: Extremely arrogant and rather childish and appears to be mentally disturbed.

Retrieved from "https://vsbattles.fandom.com/wiki/Defalt?oldid=4687723"
Community content is available under CC-BY-SA unless otherwise noted.