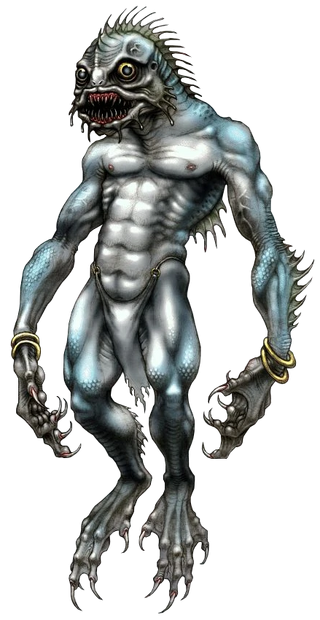 The Deep Ones are a sapient, humanoid form of aquatic life who possess amphibious and fish-like features. Deep Ones do not age and cannot die of natural causes, living forever unless killed. The beings also seem to continue growing throughout their lives, some of the largest reaching heights of over 30 stories. While they normally reside beneath the waves in sunken caverns and temples, they can survive on land for quite a long time and will often do so to fulfill various purposes. In the story The Shadow Over Innsmouth, the Deep Ones strike a deal with the people of a fishing town which is beginning to dry up. The creatures offered to keep the fish plentiful and give the townspeople vast quantities of gold, but in return, the people of Innsmouth had to do two very important things.

Name: The Deep Ones, Blasphemous Fish-Frogs, the Fish-Men

Classification: Unknown species of intelligent marine life, Possibly the offspring of Dagon and Hydra | Half human Deep Ones who have acquired the "Innsmouth Look", gaining amphibious features

Attack Potency: At least Street level (Even an average Deep One can overpower a physically fit human while on land), Increases with age | Athlete level (While they can easily overpower the vast majority of people, Hybrids can be clumsy or unfit for combat if they have yet to grow accustomed to their mutations)

Speed: Normal Human while on land, Superhuman while in the water | Varies

Durability: At least Building level (Even weaker Deep Ones are perfectly capable of surviving at the bottom of the ocean), Increases with age | Varies (More experienced Hybrids may be far more resilient, whereas weaker ones may only possess the durability of an average human)

Standard Equipment: None, though they are perfectly capable of utilizing man-made weapons such as knives and even firearms | Varies for each individual

Weaknesses: They appear to grow weaker if out of water for an incredibly lengthy period of time, but it is unknown if this will actually kill them | Less experienced individuals may have awkward movements and less control over their bodies

Key: Deep Ones | Deep One Hybrids