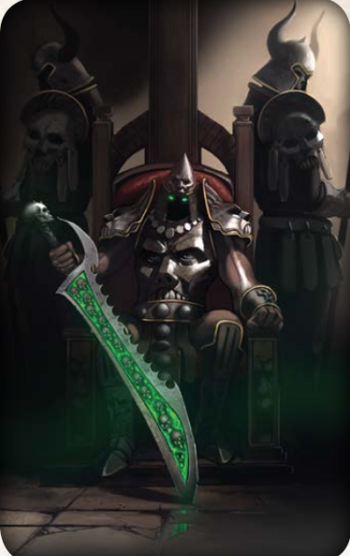 The Deathless is a fallen general, or governor that were killed by the rebellion of the nation in western Immoren, but through pure willpower, and denial they have become a undead knight, that normally staying in there throne room thinking the Orgoth still rules the land.

Attack Potency: Multi-City Block level (Should be on par with Severius)

Speed: Subsonic+ with Supersonic+ reaction speed (Comparable to characters that can dodge lightning)

Stamina: Limitless (The deathless has not needed rest for over 600 years)

Intelligence: Above Average (Being a trained military general that has able to outsmart the average human)

Weaknesses: If they are told that the Orgoth no longer rule Immoren, the Deathless in enter a blind rage.

Retrieved from "https://vsbattles.fandom.com/wiki/Deathless_(Iron_Kingdoms)?oldid=5130250"
Community content is available under CC-BY-SA unless otherwise noted.