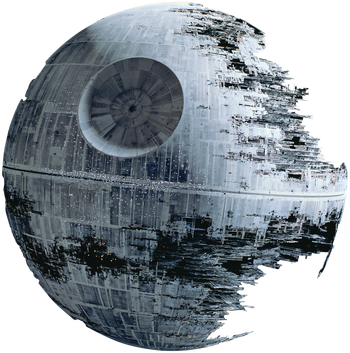 The Death Star II was the second Death Star battlestation to be constructed by the Galactic Empire. It was much larger than its predecessor, measuring over 160 kilometers wide, and was built after the destruction of the first Death Star at the Battle of Yavin. Emperor Palpatine insisted on the reconstruction of the battlestation, as it was an integral part in his plan to destroy the Rebel Alliance, leaving the galaxy in the hands of the Empire.

The Death Star's superlaser was revealed to be operational before the construction of the station was completed, surprising the Alliance attackers during the Battle of Endor. This was Emperor Palpatine's plan all along, and it nearly led to the loss of the Rebels. The Alliance ground forces on the forest moon of Endor managed to deactivate the energy shield surrounding the battlestation, and the Rebel fleet proceeded to destroy the station from within, signifying the beginning of the downfall of the Empire.

Needed prerequisite for use: Trained crew of roughly 485,000+ in various roles (this is besides her additional complement of 152,000+ gunners, 76,000+ maintenance droids and personnel, and 1.2 million additional Stormtrooper Corps soldiers plus 127,000+ additional naval personnel)

Attack Potency: At least Small City level+ with laser cannons (Likely at least as powerful as the point defence lasers used on capital ships). Large Mountain level+ with turbolasers (Should be no less powerful than the model used on the Arquitens-class Light Cruiser). Large Island level with heavy turbolasers (The XX-9 heavy turbolasers which dot its surface have such kinds of yields per shot). Multi-Continent level with superlaser on single reactor ignition. Dwarf Star level with superlaser at full power (Explicitly stated to be more powerful than the original Death Star, and sports many upgrades over the previous one)

Speed: Sub-Relativistic real space speeds (Can keep up with capital ships). Massively FTL+ travel via hyperspace (Hyperdrive system likely at least a Class 4 or even a Class 3. Should be capable of covering tens of thousands of light-years in a day or two)

Durability: At least Continent level without deflector shields (Superstructure was mostly still intact despite the Executor crashing into it and violently exploding. It should be noted that the Malevolence, a much smaller and less powerful vessel than the Executor, crashed into a moon and unleashed an explosion which engulfed a great deal of said moon’s surface and violently shook the entire celestial body). Multi-Continent level with deflector shields (Powered by a large shield generator. The Rebel Fleet at Endor was incapable of damaging the station's defences, requiring ground forces to disable the planetary shield rather than attacking it directly)