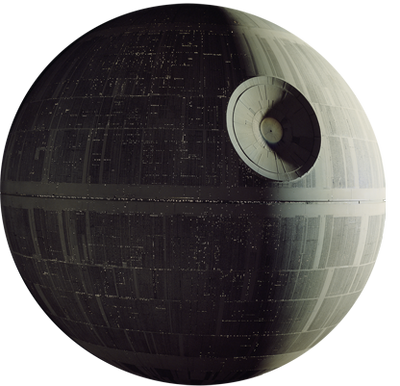 A Death Star was an Imperial military battlestation armed with a planet-destroying superlaser.

The Death Stars, whose concept had been explored even before the Clone Wars, were the first in a long series of superweapons developed to execute the later named Tarkin Doctrine.

The Death Star was designed to allow Emperor Palpatine to more directly control the Galactic Empire through fear. In most instances, a Death Star was to be commanded by a Moff. One Death Star was completely built by the Empire, with a second partially complete (and in Legends, a third one never reaching full completion, as well as a prototype being in existence). Also in Legends, a scaled-down version, the Tarkin, and a Hutt knockoff, the Darksaber, would be created by the Empire and Durga the Hutt, respectively.

Both Death Stars were destroyed by the Rebel Alliance shortly after they became operational. The first Death Star was destroyed by Luke Skywalker, with the help of Han Solo, and the second Death Star was destroyed by Wedge Antilles and Lando Calrissian. Prior to the second Death Star being built, the Galactic Empire tested out a planetary superlaser for protecting its installations on the planet of Dubrillion. At some point after the second's destruction, the Rebel Alliance also attacked and destroyed a third Death Star. Following their destruction, other planet-devastating superweapons followed, including the Galaxy Gun, the Darksaber, the Sun Crusher, and the World Devastators.

Needed prerequisite for use: Trained crew of roughly 1.2 million in various roles (this is besides her additional complement of 400,000 maintenance/security droids, 300,000+ additional Imperial Army and Navy personnel, and 26,000+ additional Stormtrooper Corps soldiers)

Attack Potency: At least Small City level+ with laser cannons (Likely at least as powerful as the point defence lasers used on capital ships). Large Mountain level+ with turbolasers (Should be no less powerful than the model used on the Arquitens-class Light Cruiser). Large Island level with heavy turbolasers (The XX-9 heavy turbolasers which dot its surface have such kinds of yields per shot). Multi-Continent level with superlaser on single reactor ignition (A single shot did this to Jedha, a large moon with a diameter of 11,263 kilometers. During the closing stages of the Battle of Scarif, a single shot destroyed half of the surface of Scarif, a small planet with a diameter of 9,112 km). Dwarf Star level with full power superlaser (Destroyed Alderaan, sending its remains hurdling through space)

Speed: Sub-Relativistic real space speeds (Can keep up with capital ships). Massively FTL+ travel via hyperspace (Equipped with a Class 4 hyperdrive. Capable of covering tens of thousand of light-years in a day or two)

Durability: At least Continent level (According to Thane, it would take a dozen Imperial-class Star Destroyers to make any impact on the Death Star's armour. Should be at least as durable as the incomplete superstructure of the Death Star II)

Start a Discussion Discussions about Death Star I