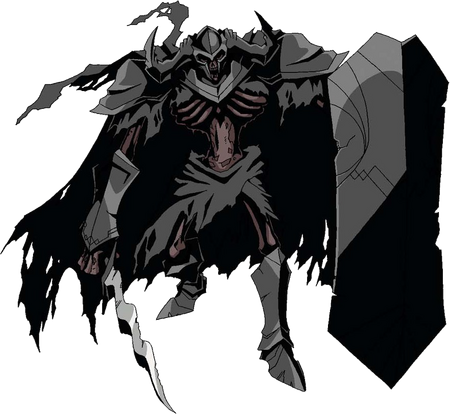 Death Knights are level 35 undead summons originating from YGGDRASIL, though they can be found naturally occurring in the New World in areas with high concentrations of negative energy, such as the undead-infested Katze Plains. In the New World, they have become one of the main pillars of the Sorcerer King's growing military, and also serve as E-Rantel's new city guards after the magic caster claimed ownership over the city.

Powers and Abilities: Superhuman Physical Characteristics, Enhanced Senses, Immortality (Types 1 and 7), Sword and Shield Mastery, Can draw in the attention and aggression of enemies, Can survive any single attack with 1 HP remaining, Pseudo-Teleportation and Intangibility (Can briefly transform into black mist to move to a nearby location), Zombie Creation (Its victims turn into level 17 squire zombies, who can then create level 1 zombies), Heal when exposed to Negative Energy, Darkvision (Can see perfectly even in total darkness), Self-Sustenance (Types 1, 2 and 3), Resistance to Death Manipulation, Disease, Energy Drain, Mind Manipulation, Necromancy, Paralysis, Pain, Physical Penalties, Positive Energy Healing, and Sleep

Attack Potency: Small Building level+ (Equal in offensive capabilities to a level 25 warrior, meaning they should be moderately stronger than Zaryusu Shasha)

Speed: Supersonic (Comparable to those in the realm of heroes)

Durability: Large Building level, possibly higher (Equal in defensive capabilities to a level 40 warrior, and should be able to survive Lakyus's Dark Blade Mega Impact. Comparable to those in the realm of heroes)

Intelligence: At least Average (Despite being summoned undead bound by their creator's commands, they possess a will of their own beyond their orders, can think for themselves, and are skilled in defensive combat)

Weaknesses: As undead, Death Knights are naturally weak to the fire and holy elements, as well as crushing damage. Additionally, they take damage from potions and good-aligned healing spells.