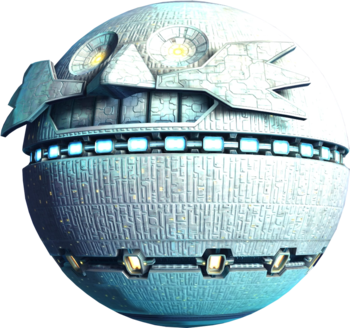 The Death Egg (デスエッグ, Desu Eggu?) is a reoccurring object in the Sonic the Hedgehog series. It is a massive orbital fortress and space station, constructed by Dr. Ivo "Eggman" Robotnik. It is the first and most famous of Eggman's space stations. Hosting some of the doctor's most deadly creations of all time, this vast stronghold serves as the scientist's ultimate weapon and key component in his various quests for world dominance.

Attack Potency: Planet level (Is considered a “doomsday machine” that is stated to be able to destroy entire planets), Multi-Solar System level with the Final Egg Blaster

Retrieved from "https://vsbattles.fandom.com/wiki/Death_Egg?oldid=5712043"
Community content is available under CC-BY-SA unless otherwise noted.