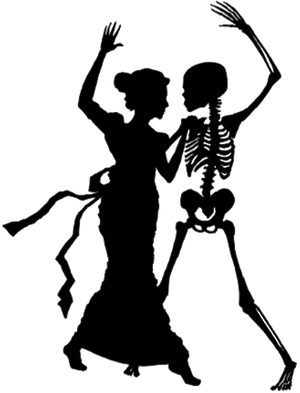 Death is noted to be a honorable servant of Nature and neither loves or laments its duties, instead of understanding itself to be necessary for the existence of new life. Its demeanor is generally stoic, yet it is also said that Death will occasionally wear a human face to pursue love among the living. Death loves to dance, and the beautiful young woman who are fated to die may be asked for a final waltz.

Age: As old as the concept of death

Classification: Incarnation | "The personified end of all life"

Superhuman Physical Characteristics, Weapon Mastery, Social Influencing, Immortality (Types 1, 4, 7, and 9. Upon defeat, as long as the spiritual power or principle behind an Incarnation exists, the Incarnation itself will reform on the next season of the year), Dream Manipulation (While Death is present, people will begin to repeatedly experience nightmares within their dreams), Magic, Soul Manipulation, Status Effect Inducement, Statistics Amplification, Statistics Reduction (Can decrease individuals' Charisma, Constitution, Dexterity, Intelligence, Strength, and Wisdom), Healing

All previous minus Immortality (Type 9). Non-Corporeal (Exists as a spiritual power without definite physical form), Avatar Creation, Abstract Existence (Type 1. The personified end of all life, understanding its purpose as a necessity for the existence of new life)

Attack Potency: Likely Street level (Exceeds the most physically fit of everymen who range from normal citizens with weapons and desperation, to military-trained brigands and experienced outlaws Possesses a strength level of 20, which exceeds the highest of human capabilities represented by a level of 18), higher with Preternatural Effects | Unknown

Stamina: Virtually limitless. Requires no form of rest or nutrition.

Standard Equipment: A scythe, long arrow, or bouquet of white lilies | None Notable

Intelligence: Nigh-Omniscient. Knows the rules for every game that exists, has existed, and will exist.

Weaknesses: Death must accept any bet or challenge if the challenger is ready to forfeit their life upon failure. If Death loses it must stop a specified person from dying, or agree to perform a service that can be accomplished in a time no longer than a single day. Death will gamble and bet on the outcome of purely random events. Death will never cheat or deceive, and will never pervert the intent of services it agrees to perform. | None Notable

Retrieved from "https://vsbattles.fandom.com/wiki/Death_(Ghastly_Affair)?oldid=5415891"
Community content is available under CC-BY-SA unless otherwise noted.