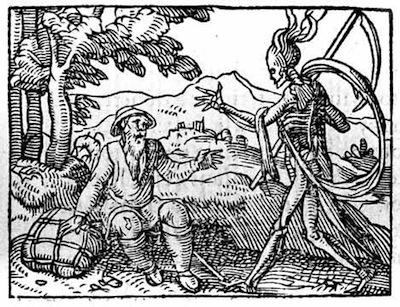 Death is the physical manifestation of the concept of, unsurprisingly, death. This concept is mostly viewed as a being in European (such as German) folklore. Occasionally associated with Old Father Time.

Gender: Referred to as Male, occasionally as female

Age: As old as time

Powers and Abilities: Death Manipulation, Disease Manipulation (Diseases are Death's messengers), limited Life Manipulation (Can extend people's lifespans with candles from an underground cavern), Non-Corporeal, Flight, Teleportation, Immortality (Types 1, 5, 8, and 9), Self-Sustenance (All types), Soul Manipulation, Durability Negation, Portal Creation, Darkness Manipulation, Invisibility, Enhanced Senses (was able to tell when his godson was called to a sick person), Aura (His presence is cold and causes plants to die), can speak to the dead, has limited Fate Manipulation (In some interpretations, he controls how and when someone will die), Abstract Existence (Type 1; Is death itself)

Durability: Unknown, non-corporeality and immortality makes him difficult to defeat

Weaknesses: Can be tricked by humans into releasing their souls.

Note: This profile is a composited version of Death as he appears in Folklore, Fairytales, and Fables.