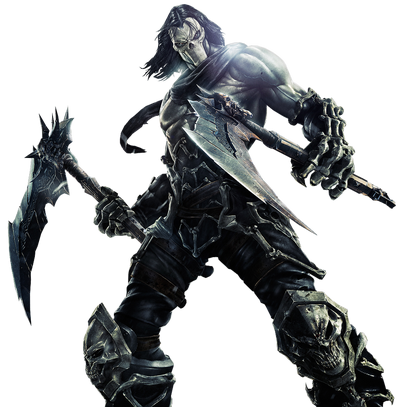 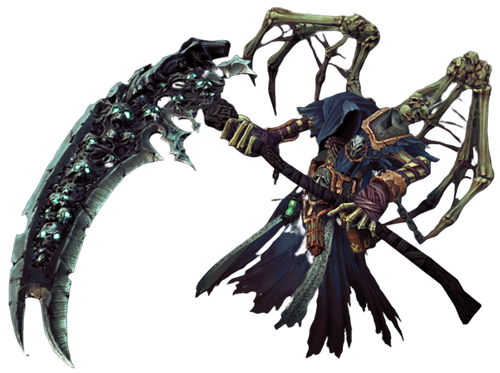 Death is the leader and strongest member of the Four Horsemen of the Apocalypse. He is the main protagonist of Darksiders 2, where he attempts to find a way to free and save his younger brother War, who was wrongly imprisoned by The Charred Council.

Death is a cold, calculating warrior with unknown millennia of combat experience. As the second born of all Nephilim, Death is incredibly wise, but also strict, never standing for annoyances or useless actions. Death will not hesitate to exert his full power to swiftly destroy his enemies in brutal fashion, regardless of size, number, or relation to him. However, as scathing and sarcastic Death might seem, he is capable of displays of kindness. He has a respect for creation not often found, and holds great compassion for his siblings, especially War, whom he almost got killed. He regrets many things, such as the slaughter of his race, the Nephilim, as well as his creation of the Grand Abominations, but his will to survive and protect the Balance keeps him calm through even the worst of times.

Name: Death, also known as "Rider of the Pale Horse", "The Pale Rider", "Rider of Death", "Kinslayer", "Executioner", "The Reaper"

Classification: Nephilim, Leader of the Four Horsemen of the Apocalypse

Attack Potency: At least City level (Even without the council's power, he is the strongest and most feared Horseman, putting him above his siblings War, Fury, and Strife. Fought against full power Samael, who was stated to possess enough strength to rival the Dark Prince himself), likely far higher (Comparable to Fury). Higher with Reaper Form

Speed: Hypersonic (Comparable to Fury who dodged this laser)

Stamina: Very high (Can withstand major injuries with only minor discomfort. Can fight near endless hordes of enemies with no rest)

Range: Extended melee range with weapons. Tens of meters with Redemption and his abilities.

Standard Equipment: Death wields a veritable armory of weapons and gear at his disposal.

Intelligence: Genius (As the second oldest, and likely wisest, of all Nephilim, Death near single-handedly engineered the Grand Abominations, powerful weapons made from the remains of the fallen race of the Ravaiim. He is capable of formulating intricate plans, as well as solving complicated puzzles swiftly. He is extremely knowledgeable in the art of necromancy and magic in general. He created the Nephilim's Respite, a flask that can give other people life, and gave it to his sister. Has millennia of combat experience.)

Weaknesses: None Notable. It is confirmed that Death's journey was not sanctioned, which causes him to lose a great portion of his power.

Death's true Scythe, referred to as the Harvester

Death using Redemption
Add a photo to this gallery