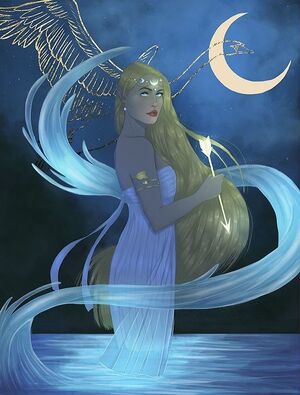 Deanna is one of the main deities present in Erilea, being the original Goddess of the Moon. She is also one of the most active goddesses in the Throne of Glass series and is the sister of Mala Fire-Bringer, the ancestor of Aelin Galathynius. She is based on the Greek goddess Artemis

Age: Unknown, however, is much older than Rowan Whitethorn

Powers and Abilities: Superhuman Physical Characteristics, Immortality (Types 1, 5, and 9), Nigh-Omnipresence (She is able to spread her being to vast distances, and be present in multiple areas in the world at once), Life Manipulation (Was implied to be able to resurrect people), Power Bestowal (Can bestow people with pieces of her magic), Non-Corporeal (Deanna's manifestations are only avatars of the goddess), Avatar Creation (Deanna can manifest avatars of herself), Telepathy (Spoke in Aelin's mind), Fire Manipulation (Wields moonfire, an extremely cold and white version of Mala Fire-Bringer's burning hot fire), Possession (Possessed Aelin) and Acausality (Type 4. Time is fluid to Deanna and the normal laws of cause and effect do not apply to her)

Attack Potency: High Universe level (The gods and goddesses are consistently stated to be beings of higher existence, implying at least 4-D power. However they do not possess feats of destruction at a universal scale)

Speed: Nigh-Omnipresent (Can spread her being across vast distances and be present in multiple areas of the world simultaneously)

Stamina: Extremely High to Infinite (Deanna does not possess a physical body, so should not be able to tire)

Range: Unknown, likely Universal+ (targeted and possessed Aelin from an unknown place beyond time and space)

Intelligence: Unknown, possibly Gifted. Deanna outsmarted and manipulated Aelin into giving her control and should possess vast quantities of experience over thousands of years

Retrieved from "https://vsbattles.fandom.com/wiki/Deanna?oldid=4915999"
Community content is available under CC-BY-SA unless otherwise noted.