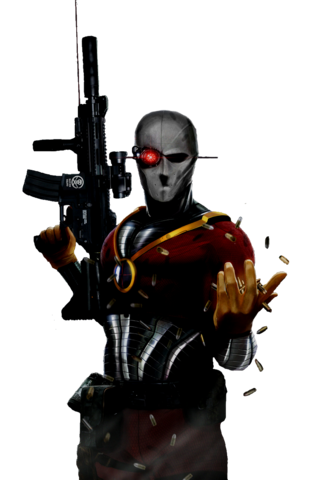 Floyd Lawton is Deadshot, known as the world's deadliest marksman. His weapons of choice are two guns mounted on each wrist. He began his career as a vigilante in Gotham City, but he later became a highly-priced assassin and mercenary. He has been a core member of the Secret Six and the Suicide Squad.

Tier: 9-A by himself and with weapons

Attack Potency: Small Building level+ physically (Smashed a wall. Somewhat on par with Batman and the rest of the Bat Family) and with equipment (Blew up a fairly large helicopter)

Speed: Massively Hypersonic (Should not be overwhelming slower than Cassandra Cain, who outran a bullet and is on par with Katana , Dodged a speeding car, reacted to one of Oliver Green's arrows and has evaded bullets)

Striking Strength: Small Building Class+ (Smashed a wall. Regularly trades blows with the likes of Batman and other members of the Bat Family)

Durability: Small Building level+ (Unfazed after getting shot in the head, survived a car explosion and getting smashed into fences by a metahuman. Regularly takes hits from several members of the Bat Family, including Batman himself)

Intelligence: Master in the use of long range weapons, and an experienced mercenary

Weaknesses: Holds back against worthy opponents