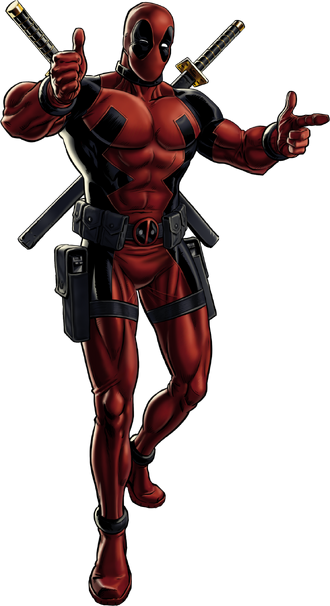 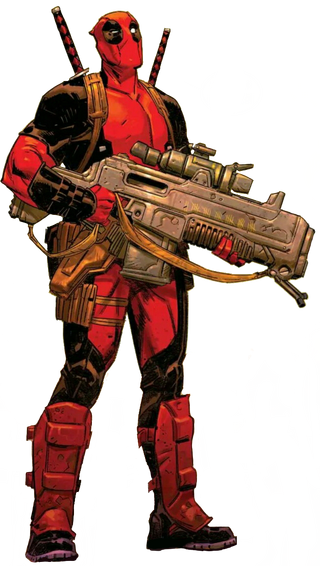 A disfigured and mentally unstable mercenary, Deadpool originally appeared as a villain in an issue of New Mutants, and later in issues of X-Force. The character has since starred in several ongoing series and shares titles with other characters such as Cable. Also known as the "Merc with a Mouth," Deadpool is famous for his talkative nature and his tendency to break the fourth wall, which is used by writers to humorous effect.

Superhuman Physical Characteristics, Regeneration (Mid-High. Regenerated from being reduced to ashes after hours), Immortality (Type 3), Extrasensory Perception (Can see, talk, and interact with spirits/intangible beings), Experienced in many forms of armed combat, including swordsmanship and marksmanship, Mastery of martial arts, stealth, and assassination, Completely unpredictable and often uses annoying banter to confuse and distract his opponents, Capable of breaking the fourth wall and is aware that he is a fictional character, Limited hammerspace, Pressure Points (Shown here), Resistance to soul-based attacks, body possession, telepathy, photographic reflexes used to copy his fighting style, Poison Manipulation (His healing factor could eventually catch up with poison damaging his body. Casually avoided being drugged due to every cell in his body regenerating, claiming that poison doesn't have enough time to affect him), Madness Manipulation, Mind Manipulation & Telepathy (Went crazy by looking into a rock with that effect and had his healing factor fix his broken brain. An entity with the ambition to consume all consciousness into its own found difficult to access and consume his mind. The chaos in his mind made it hard for Psylocke to get information from him with her powers. Claimed to be impervious to mind control after resisting said power from Dracula. Claimed that having one's mind reaching inside his head never worked out well for mind-readers due to his brain cells constantly regenerating, explaining that "what a telepath normally locks on to-- memories, emotions, beliefs--" in his head "it's like trying to hold on to syrup", all while having Cable fighting him inside his head after the latter used his telepathy on him. Ended up going sane/happy from Madcap's powers, which should make targets insane, although he was still affected by this), Petrification (Got his skin magically turned into rock and healed from it), Death Manipulation (Survived "the power of instant death", surprising his aggressor), cold (Walked around in -42 degree weather for 3 days straight)

Explosion Manipulation (Is adept with usage of explosives), Deconstruction (With a Chitauri hand cannon), Existence Erasure (With a gun that snuffs out opponents along with their past selves), Sound Manipulation (By producing powerful bursts of sound)

Used to have the following powers: Immortality (Types 1 and 5) and Resistance to Death Manipulation (Was cursed by Thanos to be immortal, which left his soul unable to enter the afterlife even if he was completely destroyed and made him unable to be killed even by Death herself, but he lost these abilities after the curse was lifted)

Speed: Massively Hypersonic+ Combat and Reaction Speed (He should be comparable to Captain America)

Durability: Small Building level (Survived being thrown with enough force to make a crater in the wall)

Stamina: Extremely high (Can survive being blown to pieces and can regenerate from a pool of blood)

Standard Equipment: 2 katanas, 2 pistols, various other weapons such as grenades, machine guns, bombs, etc, sometimes has a personal teleportation device but he cannot control where it sends him (that might change after current run), has been known to carry a machine that can create a holographic disguise

Intelligence: Average. Aware that he is a fictional character, and often breaks the fourth wall, master of armed and unarmed combat, can actually execute clever plans despite his insanity

Weaknesses: He is completely insane (although this is sometimes a strength rather than a weakness). His regeneration is incredibly slow and painful, and requires his own concentration to work)

Note 2: Here's a video showcasing some of Deadpool's best feats