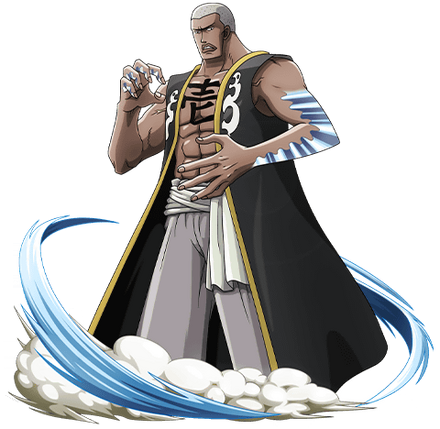 Daz Bonez is a former bounty hunter who joined Baroque Works and was the highest ranked male Officer Agent and the strongest under Crocodile himself. His codename was Mr. 1 and his partner was Miss Doublefinger.

Powers and Abilities:  Superhuman Physical Characteristics, Expert Hand-to-Hand combatant, Acrobatics, Limited Metal Manipulation and Transformation (Can create blades from any part of his body), Body Control (Can make his blades spins at high speeds), Air Manipulation (Can produce precise thin air slashes capable of cleanly cutting through buildings), Resistance to Bladed and Blunt Weaponry and to Fire Manipulation/Heat Manipulation (Blocks Usopp's flame star with his hand and resisted the water boiling bath in Impel Down when he had no powers).

Attack Potency: Multi-City Block level (Inferior to Crocodile but not by an extense margin, severely damaged Zoro) | Small City level (Undoubtedly stronger than Mr. 3, and should at least be slightly stronger than Bon Clay)

Speed: High Hypersonic (Kept up with Zoro and managed to outmaneuver him on some occasions, and blocked most of his attacks)

Durability: Multi-City Block level (Tanked a kick from Bon Clay, who is physically comparable to Daz and contended with him), higher against cutting and piercing attacks (Through normal means, Zoro was incapable of even scratching the surface of Daz's skin with his blades despite proving to be physically superior via overpowering his offense and defense during the majority of their fight) | Small City level (Comparable to his Attacking Power), far higher against cutting and piercing attacks (weapons utilized by marine officers could not even scratch him, and he was even capable of stopping an attack from Dracule Mihawk despite later being cut down [though this may be attributed to Mihawk utilizing Haki to bypass his Devil Fruit functions]).

Intelligence: Adept fighter with experience as an assassin.

Supa Supa no Mi (Dice-Dice Fruit) is a Paramecia-type Devil Fruit, eaten by Daz Bones, allowing him to gain characteristics of a steel blade to attack opponents with, making Daz Bones a Fullbody Bladed Human.