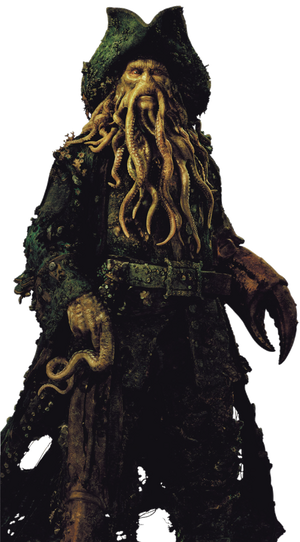 Davy Jones is the legendary supernatural sailor and an antagonist in Disney's Pirates of the Caribbean series. He is first introduced as the main antagonist in the film Dead Man's Chest, and has appeared as the secondary antagonist in the sequel At World's End. When the original Disneyland attraction was revamped in 2006, Davy Jones was added to the ride. Among other appearances, the character appears in The Legend of Captain Jack Sparrow attraction at Disney's Hollywood Studios, as well as several books and video games.

Once a mortal pirate, Davy Jones was saddled with the responsibility of ferrying the souls of deceased sailors to the Land of the Dead, that is until he was forsaken by the sea goddess Calypso. The condemned captain of the Flying Dutchman, Davy Jones preys on wayward sailors lost at sea. Those who wish to avoid death and final judgment serve Jones aboard his haunted vessel, eventually becoming a part of the ship itself, forever enslaved to its terrifying captain. Davy Jones also commands the Kraken, a great squid-like beast of the sea.

Classification: Cursed Human, Ruler of the Ocean Depths, Captain of the Flying Dutchman

Powers and Abilities: Superhuman Stats, Peak Human Speed, Master Swordsman, Immortality (Types 1, 2 and 8, as long as his heart exists), Regeneration (Low), Can Summon the Kraken, Can travel between dimensions, Teleportation (Only when there is seawater nearby, can teleport from ship to ship), Intangibility, Underwater Breathing (Type 2. Can breathe underwater), Controls the Kraken, Pocket Reality Manipulation (Controls Davy Jones's Locker), Pain Tolerance (Was completely indifferent to being stabbed in the shoulder by a dying James Norrington), Curse Manipulation (Can mark any individual with the Black Spot and is the only one who can remove it. Whoever agrees to become a member of his crew slowly mutates into some sort of sea monster and eventually merges with the Dutchman after a century of slavery), Soul Manipulation (Can bind souls of sailors to his ship by making a deal with them to delay their death in exchange for becoming part of his crew), Possibly Clairvoyance (Was aware that Jack had always introduced himself as Captain Jack Sparrow despite the two of them not meeting for thirteen years)

Attack Potency: Wall level (Can easily break swords in half with his crab claw), Building level with the Kraken (Can destroy ships)

Lifting Strength: At least Class 1 (Can easily lift Jack Sparrow with one arm)

Durability: Wall level, Immortality and regeneration makes him very difficult to kill (He can regenerate unless you destroy his heart)

Weaknesses: Can only be killed if his heart is destroyed (Jones locked it in a chest and buried it on Isla Cruces) and whoever possesses it can control him by extortion, Can't go on land, except for one day in ten years