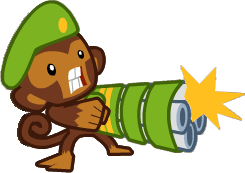 The Dartling Gun is a tower in Bloons Tower Defense. It is a rather pricey unit that chases the player’s cursor as it rains darts upon the Bloons.

Gender: None (It's confirmed that all monkeys are genderless with the exception of Heroes)

Attack Potency: Unknown physically, Likely Wall level (Compares to the Bomb Tower) | At least Small Building level (Ray of Doom can easily tear through entire waves of Bloons, though it’s not as powerful against individual MOABs) (When the Flash version of the tower once possessed infinite pierce, the tower was considered the most powerful tower in the game) | At least Wall level, possibly Small Building level (May compare to real Hydra 70 rockets)

Lifting Strength: Likely Peak Human (Can easily carry and use a gatling gun the size of itself and massive darts that are just as big as the gun itself)

Stamina: Above average. Can attack non-stop for an extended period of time, albeit without moving or taking damage

Range: At least Tens of Meters, likely Hundreds of Meters

Intelligence: Likely Average. Above Average in terms of combat

Weaknesses: Always follows the player’s cursor, even when Bloons are present, Can only use it's most powerful abilities from one of two upgrade paths

Retrieved from "https://vsbattles.fandom.com/wiki/Dartling_Gun?oldid=6193948"
Community content is available under CC-BY-SA unless otherwise noted.