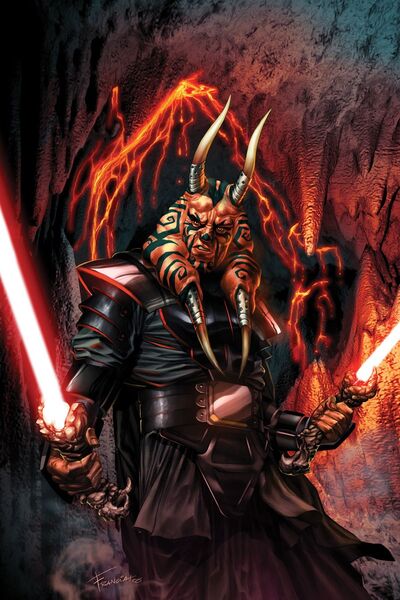 Darth Wyyrlok was a male Chagrian Lord and foremost loremaster of the One Sith. He was afforded a title of hereditary esteem in his capacity as the most trusted servant of the Dark Lord Darth Krayt, only to whom Wyyrlok was second in knowledge and power. When the Dark Lord usurped the Imperial throne and installed himself as Galactic Emperor, Darth Wyyrlok served as steward of the new Sith Empire, when so required, in his Lord's stead.

Over seven years, Krayt continued to establish his empire with Wyyrlok at his side. Simultaneously, the new Emperor's body continued to deteriorate, due to the presence of Yorik-Kul in his body. Wyyrlok sought remedies to the ailment, but was unable to find a cure for his Master. Krayt attempted to bring Cade Skywalker, who possessed unique healing abilities, into his Sith Order, but failed to do so. Although Krayt remained optimistic about his condition, Wyyrlok was not satisfied, and he set off on a perilous journey into the Deep Core to find a cure for his ailing Master. Unable to find one, Wyyrlok later killed his Master on Had Abbadon, after Krayt had been severely injured in a battle with Imperial Knights and criminals led by Skywalker. However, Wyyrlok was the only member of the One Sith that knew of Krayt's demise; he collected and interred the Dark Lord's body in a stasis chamber within XoXaan's Temple on Korriban. While pretending that Krayt had resumed one of his many periods of regenerative hibernation, Wyyrlok traveled to Coruscant where he assumed the Dark Lord's position as Galactic Emperor, and continued implementation of Krayt's dream—to initiate every living being of the galaxy into the One Sith Order. However, when Krayt was resurrected, he punished Wyyrlok for his treachery. After Krayt led an attack on the Temple of the Sith on Coruscant, he and Wyyrlok dueled, ending in Wyyrlok's death at the hands of his former master.

Classification: Chagrian, Sith Lord, Former Loremaster of the One Sith

Attack Potency: Planet level (Casually deflected Force Lightning from Darth Andeddu, Killed pre-ressurection Darth Krayt and traded blows with him after his resurrection as well as matched Krayt's Sith Lightning without being overpowered or overpowering him. His Force powers are acknowledged as being second only to Krayt's)

Speed: Relativistic (Kept up with Darth Krayt and reacted to attacks from Darth Andeddu), FTL Reactions and Combat Speed augmented by Precognition

Intelligence: Gifted (As the loremaster and lieutenant of the One Sith and Darth Krayt's personal confidant, Darth Wyyrlok is highly intelligent, strategical, and opportunistic, sharing his master's vision but often questioning him as he was instructed to do by Krayt, while also capitalizing on Krayt's moments of weakness in order to manipulate and ultimately kill him and take his place as the leader of the One Sith. Wyyrlok is skilled in both dual-wielding and single-wielding lightsabers, and his mastery such that he was able to hold his own against Darth Krayt, utilized Force abilities in conjunction with his lightsabers in order to manipulate his opponents psychologically. Wyyrlok is a master in the ways of the dark side of the Force, having been outright acknowledged as having powers that are second only to Krayt and demonstrating the ability to match Krayt in combat with his abilities. Wyyrlok is a highly skilled practitioner of Sith Magic, able to create complex illusions to confuse and defeat his opponents and even defeat the Sith Lord Darth Andeddu in a battle of illusions, Wyyrlok himself remarking that the magic he used was only an iota of his full potential with Sith sorcery.)

Retrieved from "https://vsbattles.fandom.com/wiki/Darth_Wyyrlok_III?oldid=6619770"
Community content is available under CC-BY-SA unless otherwise noted.