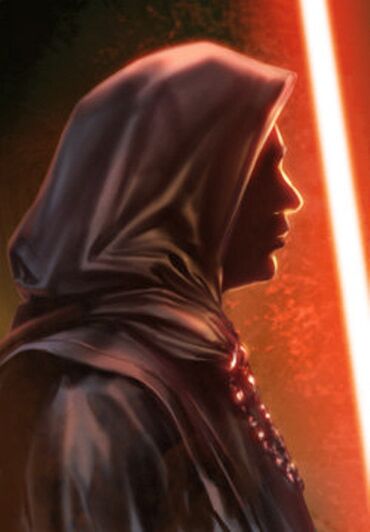 Darth Vectivus was once an ordinary businessman working as an administrator of the Jonex Mine Eight Eleven B mining facility. He started his exploration of the dark side as nothing more than a hobby, eventually he became an apprentice to a Sith Master, and eventually he became one as well. Because of his moral code and ethics as a business executive, he didn't succumb to the dark side's lure of power. He didn't care for galactic conquest, violence or defeating the Jedi, instead he dedicated all his time studying Sith lore and gaining knowledge. He eventually returned to his Home, where he left his life's legacy in a Sith holocron and died peacefully surrounded by friends and family.

After his death, years later, his spirit remained as a Force Ghost in the asteroid, underneath the Home, which had become the residence of the Dark Lady Lumiya. She stayed there learning the secrets of Darth Vectivus and mastering his own technique. She used the spirit of Vectivus to try to turn Jason Solo into the Dark Side. Using his moral code and ethics, he succeeded into convincing Jason Solo into, later, becoming the infamous Darth Caedus.

Darth Vectivus's spirit also met the young Jedi that accompanied Jason Solo, Nelani Dinn. He engaged her into a fight with his mynock phantoms, where he tried to make her kill him in order to save more lives. Even after assuming the form of the Dark Lord Palpatine she showed resilience, refusing to take his life. He cautioned her as he illuminated her way before disappearing back into the Force, although it was fruitless as she ends up dead at the hands of Jason Solo later on.

Powers and Abilities: Superhuman Physical Characteristics, Enhanced Senses, Precognition, Clairvoyance, Telekinesis, Forcefield Creation, Light Manipulation (With Force Flash he is able to create a burst of light), Mind Manipulation, Force Lightning (Although he never displayed it he should possess it, as he was a Sith Lord because of knowledge and exploration of powers), Sub-Atomic Matter Manipulation (Able to create a Holocron, which requires one to make numerous precision alterations to it on a subatomic scale, though this is not combat applicable), Summoning (Can summon hundreds of Force Phantoms), Soul Manipulation (Each Force Phantom is linked to a soul somewhere in the universe), Non-Corporeal (As a force ghost he can also change his shape at will, levitate and completely conceal his presence)

Attack Potency: Planet level (As a Banite Sith Lord he should be comparable to the likes of Darth Bane and Darth Zannah)

Speed: Relativistic with FTL reactions and combat speed (As a Dark Lord of the Sith, he should be comparable to Jedi Knights and Masters such as Obi-Wan Kenobi)

Range: Extended melee range, galactic with his Force Phantoms, he can send them everywhere in the galaxy, they are also linked with lifeforms from anywhere across it

Intelligence: Gifted. In life before he became a Sith Lord, he was a very successful businessman and worked as an administrator in a mining facility, where he was in charge of hundreds of employees. Later after becoming a Dark Lord, he dedicated his entire life to studying the Force and he even created the unique dark side ability, Force Phantoms.

Weaknesses: As a Force Ghost he didn't want his studies to fall into the wrong hands, so he tried to make Nelani Dinn strike him down.

Retrieved from "https://vsbattles.fandom.com/wiki/Darth_Vectivus?oldid=5795158"
Community content is available under CC-BY-SA unless otherwise noted.