VS Battles Wiki
Register
Don't have an account?
Sign In
Advertisement
in: Tier 8, Tier 8-A, Tier 5,
and 45 more 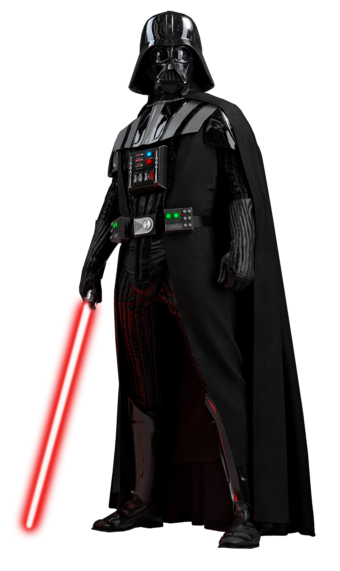 Darth Vader is a Dark Lord of the Sith and the apprentice of Emperor Palpatine, ruler of the Galactic Empire. Vader was once the esteemed Jedi Knight Anakin Skywalker, whose unparalleled midichlorian count labeled him as the Chosen One destined to bring balance to the Force. However, the numerous tragedies he suffered during his service to the Jedi Order in the Clone Wars took their toll on Skywalker, making the young knight desperate to find a way to protect his lover Padme Amidala. This opened the Chosen One to the manipulations of Darth Sidious, who turned the newly christened Vader against the Jedi Order, slaughtering numerous Jedi and their younglings as part of Order 66.

However, Vader was defeated on Mustafar by his former master, Jedi Knight Obi-Wan Kenobi, leaving the Sith Lord with grievous injuries and burns so severe that he had to be encased in his iconic life support system. With his former identity fully relinquished, Vader became a feared enforcer of the emperor's regime, laying waste to any who would oppose Palpatine's will. However, Vader was defeated once more by his son, Luke Skywalker, in lightsaber combat during their final confrontation aboard the Death Star II. Being offered mercy by his son, Vader's paternal instincts took over as Palpatine began to electrocute Luke with a continuous stream of Force Lightning. Subduing his master from behind, Vader then tossed Palpatine into the reactor shaft to save Luke, sustaining fatal injuries and severe damage to his life support systems in the process. Luke then removes Vader's helmet, allowing Anakin Skywalker to look into his son's eyes for the first and final time before becoming one with the Force.

Same as before, Enhanced Senses and Perception, Aura-Sensing, Various lightsaber combat skills, Skilled Swordsman, Precognition/Prescience, Clairvoyance, Telekinesis, Telepathy, Telekinetic Blasts, Mind/Memory Manipulation, Illusion Creation, Psychometry, Barrier Creation (in the form of Force Barrier), Energy Manipulation (can reflect, redirect, and absorb energy attacks thrown at him), Energy Blasts (in the form of Kinetite), Regeneration (Mid-Low; in the form of Force Healing), Resistance to Poison, Matter Manipulation on a sub-atomic scale (as per editing the Holocron, to activate it, it requires one to make numerous precision alterations to it on a subatomic scale), Resistance to Transmutation (resisted the effects of the Muur Talisman which turns even force users into monsters known as Rakghouls), Battlemind, Consume Essence, Force Scream, Force Stun, Pyrokinesis, resistance to Force Drain, Rage Power (Can become more powerful when sufficiently angered), Vehicular Mastery (Is an Expert Pilot)

Attack Potency: Multi-City Block level (Superior to Maul and Dooku. Comparable, though inferior to his previous peak of power, which still surpassed Jedi Anakin at his peak. Fought Kirak Infil'a, who is more powerful than any Jedi Vader ever faced before, although he was quickly overpowered) | Multi-City Block level (Via scaling to his durability, as it's the same power used offensively. Far superior to Anakin due to strengthening his connection to the dark side of the force. Can casually wreck an AT-AT Walker with telekinesis and destroy large freighters) | At least Planet level (By the time of Return of the Jedi, Darth Vader has surpassed his previous peak in power; should be capable of generating such power with his strongest techniques at the very minimum)

Durability: Small Building level naturally (His armour is designed to dampen blaster-fire and has withstood glancing blows from Clone Trooper Carbines. Received little to no damage from Lyleks. Survived a massive volley of blaster fire from BT-1). Multi-City Block level with Force amplification (Took a telekinetic thrashing from Kirak Infil'a. Created a force shield that repelled a portion of a large tsunami with assistance from the Inquisitorious, each of whom are vastly inferior to Vader himself, although they were eventually overwhelmed) | Small Building level naturally. Multi-City Block level with Force amplification (Withstood the destruction of a Sith Temple at near point-blank range. Comparable, if not superior, to Ahsoka Tano) | Multi-City Block level+ naturally (He wears heavy durasteel armor, the same material used for the armor of Assault Droids made by the Star Forge). At least Planet level with Force amplification (Withstood prolonged exposure to the full power of Darth Sidious' Force Lightning before succumbing to fatal wounds and the failure of his life support system and cybernetics)

Range: Extended melee range with lightsaber. Planetary with Force powers (Capable of Force Choking someone in orbit around a planet while he's on the surface). Interstellar with telepathy and Force senses | Extended melee range with lightsaber. Stellar with Force powers (Per the Force Secret "Distant Power"). Galactic with telepathy

Standard Equipment: His lightsaber, armor that can resist blaster bolts and lightsaber strikes to a degree

Weaknesses: Darth Vader is vulnerable to electric attacks of sufficient strength due to being a cyborg, and he cannot use Force Lightning (He can shield himself with the force and also modify his suit against this but strong enough electric attacks can still kill him, such as Darth Sidious'), his suit acts as a life support system and he will die if removed from it, the control panel on his chest is a weak-spot that can easily be damaged

Note: This profile only covers Anakin Skywalker after he became Darth Vader. The Sith Lords Respect Thread - Information on various Sith Lords powers, abilities, feats, and backgrounds as well on the Force itself.

http://www.comicvine.com/profile/zapan87/blog/darth-vader-respect-thread-part-1/98512/ - Has both Disney and Legends.

http://www.comicvine.com/forums/gen-discussion-1/darth-vader-respect-thread-part-2-1643437/ - Has both Disney and Legends.

http://www.comicvine.com/profile/zapan87/blog/darth-vader-respect-thread/98512/ - Has both Disney and Legends.

http://www.comicvine.com/forums/gen-discussion-1/darth-vader-respect-thread-part-2-1643437/ - Has both Disney and Legends.

"You have failed me for the last time"