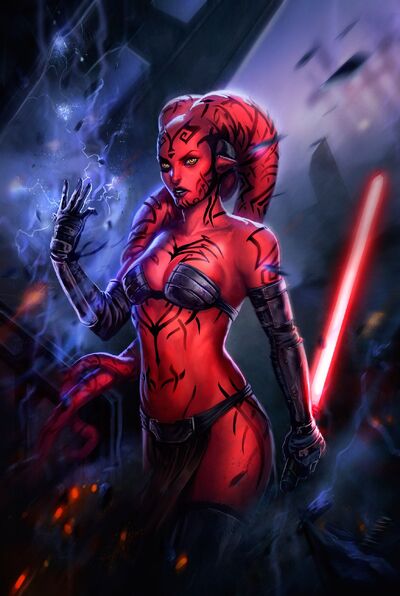 Darth Talon was a female Lethan Twi'lek who became a Sith Lady in Darth Krayt's One Sith in 137 ABY. Talon was styled with black Sith tattoos covering her body including her head and lekku; each tattoo had been earned in ritual combat and inscribed by Krayt himself. As a Sith apprentice, she was trained by a fellow Twi'lek Sith Lord named Darth Ruyn, whom she later killed on Krayt's command with a swift decapitating strike of her lightsaber, shortly before ascending to the rank of a full-fledged Sith in Krayt's Order.

Recognizing her unshakable loyalty, Krayt anointed Talon as one of his two Hands, thus making her an extension of the Dark Lord's own will. In this capacity, Talon found herself working alongside her Hand counterpart, Darth Nihl. Talon was often tasked with her Master's most important missions, including the capture of the Jedi fugitive Cade Skywalker, and his training in the ways of the dark side of the Force, until her apprentice renounced the One Sith. Talon always remained loyal to her lord Darth Krayt, even during Darth Wyyrlok III's attempted takeover of the One Sith, aiding Krayt in his recovery and along with Nihl fighting off the Sith who stood between Krayt and his former Voice, witnessing his return to power. When Darth Krayt finally fell during the Battle of Coruscant, she entered hiding along with the rest of the One Sith, working from concealment to achieve their goals by less overt means.

Attack Potency: Planet level (Killed Darth Ryun, who should be at least comparable to Yarael Poof. Outmatched jedi masters Shado Vao and Wolf Sazen simultaneously, incapacitating the former with her force abilities and nearly killing the latter in the process. Fought with Pre-Training Cade Skywalker and forced him to tap into the Dark Side in order to overpower her, and fought him several times after this. Traded blows with Darth Nihl. Able to easily overpower and kill several renegade Sith supporting Darth Wyyrlok III)

Intelligence: Gifted (As one of Darth Krayt's Hands, Darth Talon is a highly skilled combatant, her position as a Hand alone putting her at a status greater than the majority of the Sith at the time. Having been personally trained since birth in the Sith Academy on Korriban by Darth Ruyn, Talon's inherent abilities as a Force-sensitive were honed in order to transform her into a lethal Sith assassin, each tattoo on her boding having been earned through victories in combat. She is a practitioner of both Ataru and Makashi forms of lightsaber combat, incorporating moves and techniques from both styles into her combat in conjunction with her Force abilities. She is skilled enough to easily dominate and disarm the imperial knight Elke Vetter in single combat without so much as taking a single hit, match both Shado Vao and Wolf Sazen simultaneously and nearly kill both of them, as well as matching Cade Skywalker on multiple occasions. Talon skill in the Dark Side was even seen by Krayt as sufficient to allow her to take Cade as an apprentice and train him in the ways of the Sith. As an assassin she is skilled in stealth and concealment, both naturally and through Force abilities, and she is also a skilled pilot, showing the ability to operate both starships and speeder bikes)

Weaknesses: Obedient to the will of Darth Krayt without question, to the point where she will willingly allow herself to be killed if he orders her to.

Retrieved from "https://vsbattles.fandom.com/wiki/Darth_Talon?oldid=5795211"
Community content is available under CC-BY-SA unless otherwise noted.