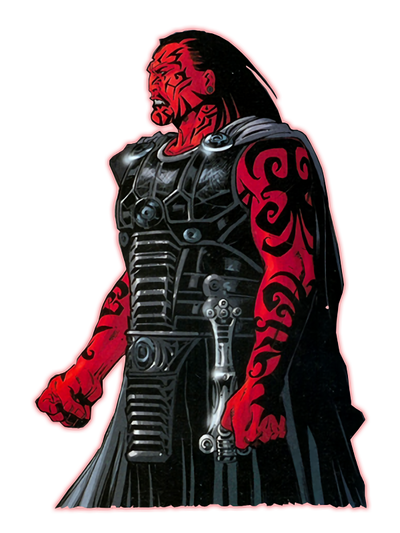 Darth Stryfe is a male Human and a member of the One Sith Order led by Darth Krayt. Stryfe served Krayt after the deposing of Emperor Roan Fel at the end of the Sith–Imperial War. In the time of the ensuing conflict, he was selected to be Krayt's Fist, the head of the Empire's military. Stryfe later oversaw a search for Jedi in the academy on the planet Ossus, and ordered its destruction. In that same year, after Krayt's Hands, Darth Nihl and Darth Talon, let Cade Skywalker escape the Sith Temple, Stryfe was named Krayt's new Hand to replace Nihl.

The Sith discovered that Skywalker and his companions had attacked an Imperial outpost on the Deep Core world of Had Abbadon, and that among them was the spirit of the ancient Sith Lord Karness Muur. After Muur requested a meeting with Krayt, Stryfe was among those Krayt took with him to Had Abbadon. Discovering that they had walked into a trap, the Sith engaged Skywalker and his allies. The Sith were defeated and Stryfe's body was recovered by Darth Wyyrlok III. Unbeknownst to Stryfe, Wyyrlok had killed Krayt after the battle. Taken to the Sith Temple on Korriban for further healing, Stryfe awoke to discover he could no longer feel his Lord Krayt in his mind, and was convinced his master was dead. However, Wyyrlok convinced Stryfe that Krayt still lived, and explained that he would be taking control of the Empire while Krayt recovered. Believing this, Stryfe swore he would give his support to Wyyrlok. Together the two left for Coruscant to secure the throne and implement the next stage in Krayt's plan for a unified galaxy.

After Wyyrlok ordered the execution of the Final Protocol, Stryfe was tasked with overseeing the Sith Empire's Outer Rim Third Fleet for the mission. During Stazi's operation to rescue the inhabitants of Dac, the Third Fleet engaged the Alliance fleet, aiming to ensure the evacuation attempts failed. However, after a fleet from Roan Fel's Empire-in-exile arrived to aid Stazi's forces, Stryfe was forced to withdraw. Following the events at Dac, it was revealed that Darth Krayt was alive. The Dark Lord of the Sith traveled to Coruscant and killed his betrayer Darth Wyyrlok, retaking his place as the leader of the Sith Empire. Darth Stryfe pledged himself to Lord Krayt and once again served at his side. Soon after, Darth Stryfe was one of the Sith charged with overseeing the attack on the Hidden Temple of the Jedi. The battle ended with the Jedi and their allies escaping the Sith–Imperial fleet, and Stryfe returned to the Sith Temple on Coruscant. The allied forces of the Alliance Remnant, Empire-in-exile, and the Jedi attacked the Sith Empire's capital shortly afterward. Before the fleet arrived, Skywalker and a strike team attacked the Sith on the ground and were met by Darths Talon and Stryfe at the Sith Temple. Stryfe faced Wolf Sazen in the ensuing fight, and though he managed to kill the Jedi, Stryfe was cut down by Sazen's blade in the process.

Speed: Relativistic (Kept up with Cade and Wolf), FTL Reactions and Combat Speed augmented by Precognition

Intelligence: Gifted (Stryfe is a highly skilled, though extremely brutal, fighter, able to match the likes of Cade Skywalker before the latter caused him to lose focus by mocking him. His skill in both combat and tactical ability was recognized by Darth Krayt, who personally selected him to be his Fist, the head of the One Sith Empire's military, a position that was once held by Darth Nihl before his promotion to a Hand, before being promoted to Krayt's Hand to replace Nihl.)

Weaknesses: Can be overly arrogant at times, Quick to anger should he be taunted in combat which will cause him to lose his focus

Retrieved from "https://vsbattles.fandom.com/wiki/Darth_Stryfe?oldid=5795032"
Community content is available under CC-BY-SA unless otherwise noted.