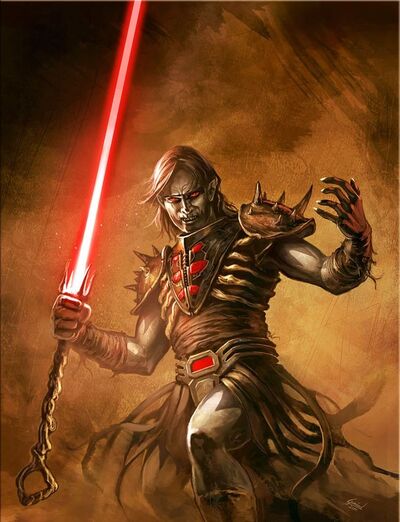 Darth Nihl was a Nagai male Sith Lord serving in Darth Krayt's Galactic Empire during the Sith–Imperial War and the Second Imperial Civil War. A former Nagai warlord, Nihl had been recruited into the One Sith by Darth Krayt, and was initially made into his Fist, and later his Hand. One of Nihl's first missions was leading the assault on the Jedi Praxeum at Ossus, in which he killed Jedi Master Kol Skywalker and mortally wounded the Zabrak Master Wolf Sazen. Over the next seven years, Nihl acted as Krayt's top enforcer over the galaxy, until the Dark Lord promoted another, Darth Talon, to also serve in the position of Hand.

During a mission to capture Fel's daughter, Marasiah, Nihl was confronted by Cade Skywalker, who attempted to kill him for revenge over his father's death. Though Nihl did not defeat Skywalker, he later captured the bounty hunter when Skywalker infiltrated the Temple of the Sith to rescue Hosk Trey'lis. Skywalker subsequently escaped, and Nihl was sent to defeat him in combat, though he lost, his right arm having been chopped off in the duel as Skywalker escaped. As a result, he was stripped of his title of Hand for his failure to defeat Skywalker and was put under Darth Maladi's charge so that she could perform experiments on him using Yuuzhan Vong biots.

Nihl later traveled to Korriban after discussing Krayt's demise with Maladi, discovering alongside Talon that only Krayt's empty armor remained. Nihl contacted Darth Wyyrlok III soon afterward and told him that Lord Krayt's body was missing, and later accompanied the Chagrian when he arrived to investigate. Claiming that Krayt must have been murdered by a member of the One Sith, Wyyrlok and Nihl conspired to maintain the secrecy of Krayt's apparent demise. Nihl, now acting in the role of Wyyrlok's advisor, was assigned to find Darth Talon, whom Wyyrlok suggested might be responsible for whatever fate had befallen Darth Krayt. His search led him to Korriban, where he found and dueled Talon within the depths of the tombs of the ancient Sith. Darth Krayt, now resurrected, then revealed himself and unveiled his plan to crush the rebellion once and for all to both Nihl and Talon. The two joined the Dark Lord as he stormed Coruscant to confront Darth Wyyrlok, Nihl cutting down several of those Sith loyal to Wyyrlok while Wyyrlok himself was killed by Krayt. Nihl later led the Sith Troopers in a counterattack against the allied forces on Coruscant, but ordered them executed after Krayt was killed by Cade. In the wake of the enemy's victory, Nihl retreated to an undisclosed location and ordered the remnants of the defeated One Sith into hiding with a new purpose: the destruction of their enemies from within.

Attack Potency: Planet level (Killed numerous Jedi during the Massacre at Ossus, including Kol Skywalker, who should be at least comparable to if not vastly superior to Yarael Poof, and severely wounded and nearly killed Wolf Sazen as well. Was able to fight both Wolf and Cade Skywalker simultaneously and was able to easily subdue him in a later one on one fight, and was fully capable of killing Cade had he not been ordered to take him alive. Traded blows with Darth Talon. Able to easily overpower and kill several renegade Sith supporting Darth Wyyrlok III)

Lifting Strength: Peak Human, at least Superhuman via Force Amplification. Class G with telekinesis (Vastly more powerful than Padawan Rivi-Anu who, while injured and exhausted, briefly held up a Venator-class star destroyer [a heavy cruiser class warship whose mass should be several to tens of millions of tonnes])

Intelligence: Gifted (Even before he joined the One Sith Nihl was a highly skilled fighter and capable leader, having originally been a global-scale warlord on his homeworld. After being trained by Darth Krayt, he was made Krayt's top enforcer in Krayt's Sith Order, and served as his Fist, or military commander until his predecessor was killed in the Sith-Imperial War and he was promoted to Krayt's Hand. He is highly skilled in lightsaber combat, having outmatched Jedi Masters Kol Skywalker and Wolf Sazen and matching other skilled lightsaber duelists such as Cade Skywalker and Darth Talon on more than one occasion)

Weaknesses: Can be somewhat overconfident, believing his own abilities as a Sith made him superior to others.

Retrieved from "https://vsbattles.fandom.com/wiki/Darth_Nihl?oldid=5795067"
Community content is available under CC-BY-SA unless otherwise noted.