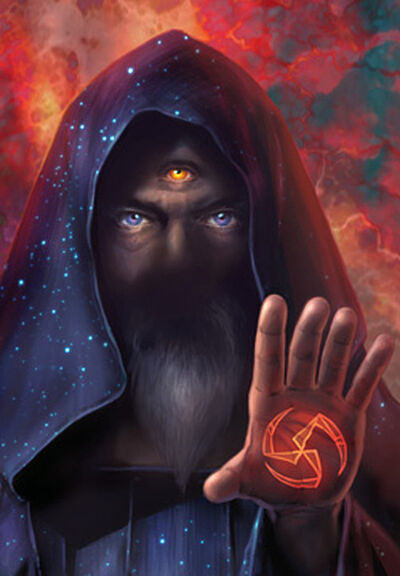 Darth Millennial was a three-eyed mutant Sith Lord and Shadow Hand, heir to the lineage of Darth Bane, who lived almost a thousand years before the Battle of Yavin. Apprenticed to Darth Cognus, Millennial was powerful in the Force and had the ability to see the future. However, he and his Master disagreed on many aspects about the Sith, and Millennial became disillusioned with the Rule of Two, which he felt was far too restrictive, and saw far more sense in Lord Kaan's Rule by the Strong.

Eventually, he left his enraged Master and founded the Dark Force religion, which would later become the Prophets of the Dark Side on the planet Dromund Kaas. Proclaiming himself as a prophet chosen by the will of the Force, he attracted many Force-users from across the galaxy to his religion before passing away.

Powers and Abilities: Superhuman Physical Characteristics, Enhanced Senses, Stealth Mastery, Martial Arts (Skilled lightsaber combatant), Weapon Mastery (Skilled swordsman), Precognition, Telekinesis, Telepathy, Psychometry, Forcefield Creation, Mind Manipulation/Memory Manipulation, Energy Manipulation (Can reflect, redirect, and absorb energy attacks Via Tutaminis), Clairvoyance, Aura sensing, Matter Manipulation (Sub-Atomic, Able to create a Holocron, which requires one to make numerous precision alterations to it on a subatomic scale, though this is not combat applicable), Technology Manipulation (The side effects of his connection to the Dark Side are so potent that he created his own nexus that interferes with all weaponry and technology except for lightsabers)

Attack Potency: Planet level (Fought Darth Cognus on multiple occasions but is ultimately weaker than her, though this should still put him well above the likes of Darth Zannah and Darth Bane as per the Rule of Two)

Intelligence: Gifted (Millennial is highly skilled with Force powers, possessing extremely potent precognitive abilities as well as having been personally trained as a Shadow Hand of Darth Cognus. Millennial had great belief in himself and his abilities, particularly those that allowed him to see the future, and he thought that he was special enough to be chosen as the prophet of the will of the Force. But while Millennial was supremely confident in himself, he knew when to retreat, as he did to avoid his master's wrath over disagreements on how the Sith should be ruled. Millennial himself was a strong leader, as he persuaded many followers of the dark side to leave their respective orders and join him on Dromund Kaas, creating his own organization of Force wielders that also had strong precognitive abilities as a result, two of which went on to become the personal advisers for Darth Sidious.)

Retrieved from "https://vsbattles.fandom.com/wiki/Darth_Millennial?oldid=5795209"
Community content is available under CC-BY-SA unless otherwise noted.