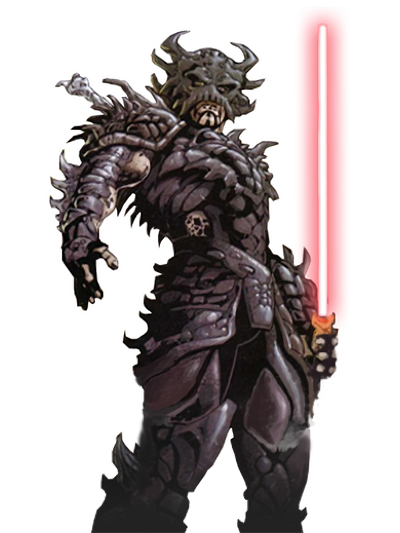 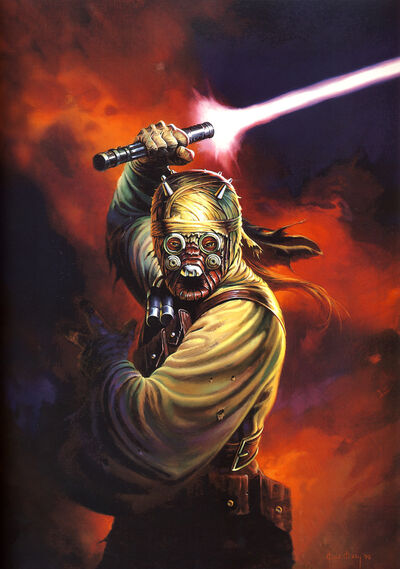 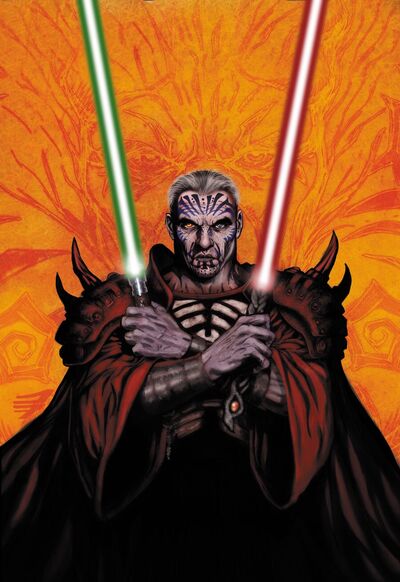 Darth Krayt, born A'Sharad Hett, was a Human male who served as a Jedi Master in the waning days of the Galactic Republic. The son of legendary Jedi Knight Sharad Hett and his wife K'Sheek, both of whom lived among the Tusken Raiders of Tatooine, he eventually became the Padawan of Jedi Masters Ki-Adi-Mundi, and later, An'ya Kuro. When he was only a teen, Hett's father was murdered by the Jedi assassin Aurra Sing, who was later defeated in a duel by a young A'Sharad Hett. During the Clone Wars, he served the Republic as a General and established himself as a charismatic leader who often led his troops from the front. He eventually became friends with the young Anakin Skywalker and helped Anakin come to terms with the destruction which had been wrought by the galaxy-wide war. A'Sharad took part in key conflicts during the war such as the Battle of Boz Pity and Siege of Saleucami. He managed to survive the Clone Wars, and was one of the few Jedi known to have escaped the Great Jedi Purge in 19 BBY. A'Sharad Hett eventually made his way back to his homeworld of Tatooine where he vowed to wage a private war against the new Galactic Empire. However, after a confrontation with Jedi Master Obi-Wan Kenobi, he was exiled from Tatooine and later discovered that it was Anakin Skywalker who became the Sith Lord Darth Vader, who he had aided in the annihilation of the Jedi Order. A'Sharad blamed himself for the destruction of the Jedi Order and became a bounty hunter. During one of his missions, he found himself on Korriban, where he trained as a Sith under the tutelage of the Dark Lord XoXaan. Hett eventually fell to the dark side after capture and torture by the Yuuzhan Vong and soon proclaimed himself Dread Lord and Dark Lord of the Sith, taking the name "Darth Krayt".

As Krayt, he became the founder and leader of the One Sith. He rebuilt the Sith Order and kept its existence hidden from the Jedi by cloaking their presence on Korriban. To survive, the Dark Lord spent many years in stasis before reemerging to form an alliance with Moff Nyna Calixte and to spark the Sith–Imperial War that led to the destruction of the Galactic Federation of Free Alliances. At the climax of the war, he deposed Emperor Roan Fel and brought about the destruction of the New Jedi Order. Darth Krayt ruled the galaxy with an iron fist for seven years before the alliance between rightful Emperor Roan Fel and Galactic Alliance Admiral Gar Stazi threatened his usurped rule. Furthermore, Krayt discovered the existence and survival of a Skywalker: Cade. Krayt feared that these deteriorating conditions and his bad health would lead to his demise before his dream was finished, and sent about the hunt for Cade Skywalker. However, during a skirmish on Had Abbadon, Krayt was mortally wounded before being killed by Darth Wyyrlok III, his most trusted advisor, who murdered believing the Dread Lord would lead to the Sith Order's destruction. But, even as he was inactive, Krayt's ideals were being carried out by Wyyrlok in his place. Krayt later healed his body from his near-death experience. Overcoming the taint of his armor, he called out to all those across the galaxy who had touched the dark side, signaling his return. With the aid of loyal Sith and a new breed of Sith Troopers, Krayt retook Coruscant, slaying Darth Wyyrlok in the process, and began making preparations to rebirth the galaxy through war. However, in the final battle, he once again attempted to turn Cade Skywalker. He failed to do so, which allowed Cade to permanently kill him.

Attack Potency: Planet level (Defeated Aurra Sing when he was just a Padawan. On separate occasions he easily overpowered Anakin Skywalker and held his own against Obi-Wan Kenobi) | Multi-Solar System level (Comparable to, although weaker than, Fate of the Jedi Luke Skywalker and assisted him in fighting Abeloth, damaging her with both his Force techniques and his physical blows) | Planet level (Overpowered and reversed Darth Andeddu's sith magic. Nearly defeated Cade Skywalker and would have done so had Morrigan Corde not intervened in their fight. Overpowered Celeste Morne possessed by Karness Muur. Much stronger than Darth Nihl. Defeated four Imperial Knights with little difficulty despite his advanced age and failing health.) | Planet level (Stated that his power had multiplied from his previous state. Killed Darth Wyyrlok III. Traded blows with and nearly killed Cade Skywalker)

Intelligence: Gifted (A'Sharad Hett is exceptionally skilled in the Jar'Kai style of fighting, wielding two green lightsabers in battle, his own weapon, and that of his father. He was able to defeat Aurra Sing in a lightsaber duel while he was still a Padawan, something his own father, a fully trained Jedi Knight, was unable to do. It was his mastery of Jar'Kai that saved Hett from being killed during Order 66, allowing him to kill the clone troopers who were sent to execute him. As Darth Krayt, he retained his mastery of fighting with two blades. A master practitioner of Niman, his skill with his blades was great enough for him to quickly defeat four Imperial Knights with little difficulty, despite his advanced age and failing health, claiming that his skills with his blades were such that he killed thousands of opponents since the Clone Wars. Krayt perfected his combat techniques over many decades and his skills with telekinesis and Sith lightning far outstripped those of any Sith of his era. Krayt is equally proficient with a single lightsaber as he is with two and is capable of combining his prowess with his lightsaber with his skill with the Force, making him even more formidable in combat. In addition to being a deadly lightsaber duelist, Darth Krayt is also talented with the Force, utilizing a wide variety of abilities including powers rarely seen among Force users such as Mind Walking and Shatterpoint Perception, as well as showing the ability to keep up with Luke Skywalker and Abeloth with his force powers in his prime. Krayt also displayed the ability to learn new Force abilities in a very short period of time with only limited exposure to said abilities, such as how he learned Transfer Essence from limited contact with Andeddu and Dark Transfer from observing Cade's application of the ability. A'Sharad Hett was also a skilled pilot, participating in multiple battles with his starfighter, and even managing to pilot a Yuuzhan Vong coralskipper even though he had no prior knowledge of how to operate it. As Krayt, he also seemed to have a considerable knowledge of engineering and robotics since he was able to start his Sith Trooper Project, in addition to the construction of the Annihilator starfighters. Hett is skilled in a number of languages as well, such as Galactic Basic Standard, Tusken, and Bocce, and even the ancient tongue of the Sith, something that only he and Darth Wyyrlok were the only known members of the One Sith to possess.)