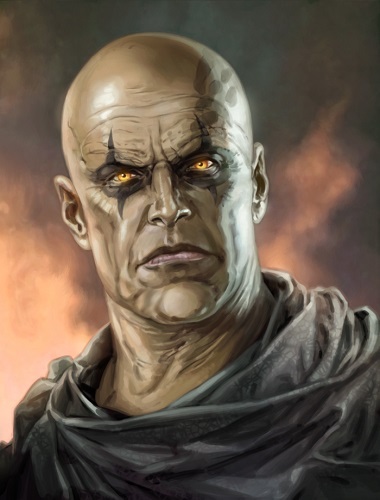 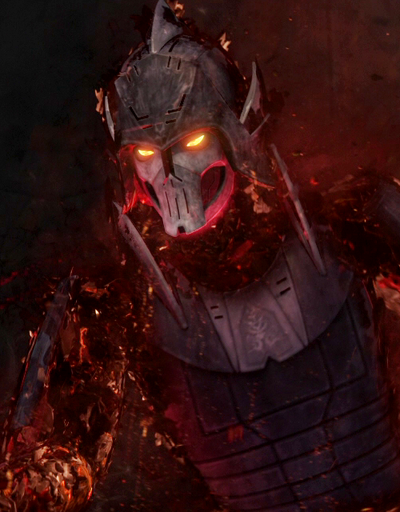 Darth Bane, born Dessel, was the Dark Lord of the Sith who created the Rule of Two. Thought by many to be the fabled Sith'ari, he rose from his birth as a poor miner on the planet Apatros to one of the greatest Sith of the new Sith Order he helped create after his training at the Sith Academy on Korriban. While he would eventually be killed by his own apprentice, Darth Zannah, in accordance with the Rule of Two, the future he longed to see, where the Sith prevailed over the Jedi, would come to pass a thousand years later.

Age: 46 years old at the time of his death

Attack Potency: Planet level (Darth Cognus asserted Bane's raw power in the Dark Side was like nothing she has ever seen or felt despite moments prior having witnessed through psychometry the devastation of Ambria and Thon's efforts to contain the power it had unleashed millennia later) | At least Planet level (His power over the Force is even greater, as he's gained the power to draw upon the Orbalisk's power over the dark side)

Speed: Relativistic with FTL reactions and combat speed (As a Dark Lord of the Sith, he should be comparable to Jedi Knights and Masters such as Obi-Wan Kenobi)

Stamina: Very high. Bane showed no signs of tiring throughout his duel with three linked Jedi masters and even before his formal Sith training, he fought entire campaigns with little need for rest or sustenance.

Standard Equipment: His Lightsaber and the Orbalisk Armor (After the 7th Battle of Ruusan)

Intelligence: Having changed the legacy of the Sith forever thanks to his meditations on the nature of the Sith, it is little surprise that Bane is a very skilled and intelligent individual with a wealth of experience in a variety of combat roles. He's particularly skilled when it comes to the areas of espionage and deception, keeping his true intents secret and misdirecting the suspicions of his teacher while at the Sith Academy on Korriban. He was a skilled duelist as well, capable of holding his own against multiple Jedi at once, with his fighting style growing in complexity as he perfected it. On top of all this, Bane has deep knowledge of ancient Sith secrets and is even skilled and knowledgeable enough to attempt the extremely dangerous ritual of transferring his essence.

Weaknesses: Bane's death field is incredibly taxing and thus impractical to use without another power source. He must overpower and expel the consciousness of another to take control of their body with Transfer Essence, and if he fails, his own soul will be lost to Chaos.

- Form V: Djem So: Known as the Way of the Krayt Dragon and the Perseverance Form, Djem So is the fifth of the seven forms of Lightsaber combat. An offensive style built to make up for the shortcomings of the other forms, Djem So is an aggressive, physically demanding combat form focusing on strength and relying on powerful counter attacks. Due to Bane's large stature and impressive strength, he is very well-suited to the use of Djem So, and he has knowledge of other forms of Lightsaber combat, such as Soresu and Juyo.

- Convection: Using the Force to alter his own body chemistry, Bane causes his own body to burn with an incredible heat that causes no lasting harm to himself and can be used to badly burn others.

- Cryokinesis: Using the Force, Bane can drain the thermal energy from others to such an extent that their body temperature drops rapidly, leaving behind only a frozen over corpse.

- Force Barrier: Bane can use the Force to create an invisible wall of energy to protect himself from attacks.

- Force Drain: This dark side technique draws the Force energy and life outside of those it's used on, using it to heal Bane. He can even create a spherical field of pure dark side energy that would instantly cause those caught within to wither away and die, but this technique is extremely taxing and therefore impractical to use unaided.

- Force Lightning: Bane channels Force energy through his limbs and unleashes it as arcs of electricity that branch out to strike multiple targets at once, with such power that even a group of other Force users can be reduced to charred husks.

- Mind tricks: A spectrum of Force powers that revolve around mental attacks. These powers can be used to read minds and communicate thoughts, cause hallucinations, along with outright controlling the minds of others.

- Telekinesis: Using the Force, Bane can move and manipulate matter with the power of his mind. He can use this to blast opponents with walls of telekinetic force to knock them back, deflect projectile attacks, disarm opponents, and, most famously, strangle an opponent by telekinetically choking them and crushing their throat.

- Transfer Essence: A radical dark side power that Bane can use to transfer his consciousness into the body of another, or even into an inanimate object. Thanks to this technique, his spirit can survive the death of his body and can attempt to invade the body of another, though he must overpower and expel their own consciousness to accomplish this, and his original body will be destroyed in the process, reduced to ash. If Bane fails to take the body of his opponent, his spirit will be forever lost to Chaos.