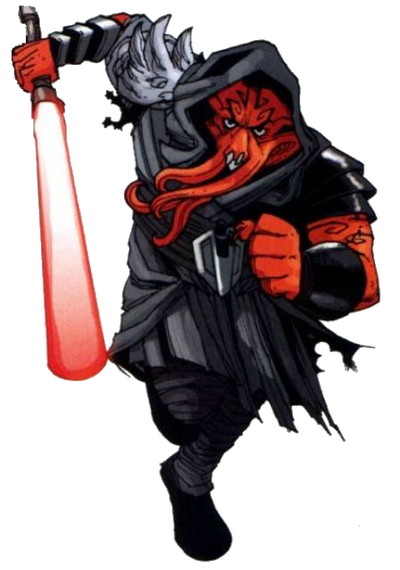 Darth Azard was a male Quarren Sith Lord of the One Sith, serving under Darth Krayt and his Empire. By 137 ABY, Azard had been selected to oversee the Imperial Outer Rim Third Fleet, which was tasked with capturing commander of the Galactic Alliance Core Fleet Gar Stazi. In response to the Mon Calamari aiding Gar Stazi in the capture of the new Imperious-class Star Destroyer Imperious, Darth Krayt traveled to Dac with a number of Sith Lords, including Darth Azard, to exact his revenge. Azard participated in the massacre of the Mon Calamari Council, where he killed many of his fellow Quarren. In the aftermath of the massacre, Azard pursued the escaping members of Rogue Squadron who had been involved in the plan to capture the Imperious. The Rogues were being rescued by Imperial Knights Treis Sinde and Sigel Dare, who were on a mission for Emperor-in-exile Roan Fel. Azard dueled Sinde, which distracted the Quarren long enough for the members of Rogue Squadron and Sigel Dare to escape.

Despite his failure to stop the Rogues' escape, Darth Azard was appointed to oversee the extermination of the Mon Calamari people. With the aid of Sith scientist Vul Isen, Azard awoke a Sea Leviathan in the depths of Dac. Azard and Isen sent the Leviathan to exterminate the Mon Calamari refugees who were hiding and by doing so draw out the Mon Calamari Rangers led by Treis Sinde, who had been fighting against the Sith. During the ensuing battle, the Sith's Aquatic Terrain Armored Transport was crippled, and the Leviathan was defeated by hordes of devilsquid, under Treis Sinde's command. Darth Wyyrlok III later ordered the execution of the Final Protocol, a plan that saw the oceans of Dac poisoned and all of the inhabitants executed within a week, with Azard and Isen in charge of implementing the plan. Later, Azard and Isen led the First Sith Imperial Strikeforce to the moon Napdu where the Hutt Azzim Anjiliac Atirue was believed to have been harboring Mon Calamari refugees. Azard ordered the same toxin that poisoned Dac be unleashed on Da Soocha, followed by the bombardment of Napdu. After their success at Napdu, Azard and Isen proceeded to the planet Utapau, planning to kill the natives for providing aid to the Galactic Alliance. However, just as Isen perfected his toxin for the planet, the two Sith were attacked by Cade Skywalker and Wolf Sazen. Azard was killed by the Jedi Master when the Sith Lord felt Darth Krayt call out to all Sith across the galaxy, distracting him long enough for Sazen to strike him down.

Attack Potency: Planet level (Treis Sinde was unable to defeat him, both he and Sinde acknowledging that he was no match for Azard. Traded blows with Wolf Sazen and only lost because he was momentarily distracted by Darth Krayt.)

Intelligence: Gifted (Azard is an able military commander, having extensively studied the history of Darth Vader adopting many of the same philosophies, particularly in his military command style, a feat which lead Darth Krayt to appoint him as the head of several major military operations for the One Sith. Azard is a skilled lightsaber wielder, demonstrating the ability to utilize his lightsaber with both the double and single blades to equal efficiency, and showing the skill to easily outmatch Treis Sinde, a Master in the Imperial Knights, as well as match Wolf Sazen.)

Weaknesses: Has a short temper

Retrieved from "https://vsbattles.fandom.com/wiki/Darth_Azard?oldid=5795031"
Community content is available under CC-BY-SA unless otherwise noted.