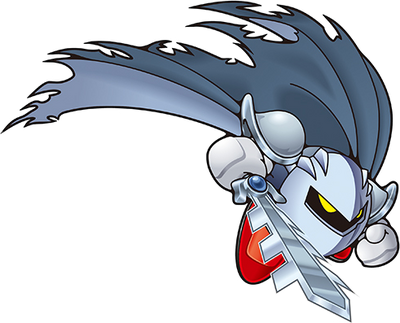 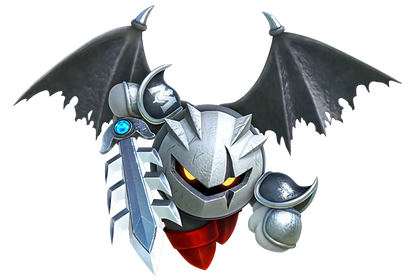 An alternative dimension version of Meta Knight that originates from the once peaceful Mirror World, he was corrupted into evil by Dark Mind along with the rest of that reality by copying the darkness of his main universe counterpart into him, becoming Dark Meta Knight. He first appeared as the secondary antagonist and a notable character in Amazing Mirror. Later he would show up as the surprise final boss of the non-canon Dededetour sub-game in Triple Deluxe, being implied to have been canonically responsable for that game's main villain descent into evil. He would then reappear in Star Allies participating with Kirby & co. as a Dream Friend, harnessing Friend Powers and possibly hanging out with fellow allies, him being the least redeemed villain that's helping the cast and being said to have shady motivations.

Classification: Mirror World version of Meta Knight, A being who was copied from the darkness in Meta Knight's heart[1], Darkest Shadow of the Strongest Warrior, Star Ally (In Star Allies)

Superhuman Physical Characteristics, Non-Physical Interaction (Can affect Void Soul), Self-Sustenance (Type 1), Master Swordsmanship, Toon Force, Regeneration (Mid in combat, Low-High over time. Like all Star Allies, he can quickly recover from being crushed flat, as well as from being impaled by allies or by Flamberge's Barbecue Party [Shown Post-Star Allies]. Came back after years from having his body being completely shattered and reduced to nothing visible, does the same thing upon being defeated in The TRUE Arena of Triple Deluxe and in Star Allies. Other inhabitants of the Mirror World also have their body shattered like a mirror upon taking enough damage, with one of them seemingly recovering from this in the middle of combat), Immortality (Type 3), Flight & Spaceflight, Duplication, Matter Manipulation (Can split people into four of themselves), Illusion Creation, Limited Shapeshifting (Made himself look like Meta Knight, which involved changing his color and the scar in his mask), Energy Projection, Air Manipulation

As before, Vehicular Mastery, Natural Weaponry (Always hits foes & cuts things reached by his wings when flying), Multiple forms of Attack Reflection, Can enter inside a mirror to be unaffected by attacks, Clairvoyance, Can summon giant swords & mirrors, Can turn into a small ball of intangible energy, Magic, Resurrection (Able to revive others via Revival Spell), Empathic Manipulation & Morality Manipulation via Friend Hearts (Can turn enemies into allies. Able to overwrite Void Termina's effects on allies; Scales to his multi-galactic potency), Healing & Purification (Friend Hearts can be used to heal and purify others. Can "Revive" defeated allies, who are merely unconscious), Cloth Manipulation, Power Bestowal (Turning targets into allies gives them that same power. Can bestow individual elemental powers when using them himself), Combining powers with allies he gains access to Fire Manipulation, Ice Manipulation, Electricity Manipulation, Water Manipulation and enhanced Air Manipulation, Creation (Can help other Star Allies create Friend Stars and the Star Allies Sparkler), Resistance to Morality Manipulation & Empathic Manipulation (Unaffected by the presence of the individual Dark Hearts), Transmutation (Like all Star Allies, he isn't transmuted after being cooked inside Chef Kawasaki and Cook Kirby's pot, process that regularly turns foes and items into food), heat and cold (Unaffected by the temperatures of Blizzno Moon and Star Lavadom), Black Holes (Able to outrun and withstand black holes from Marx)

Post-Star Allies key only: Everything he has in base, Statistics Amplification (With Power-Up Hearts, which increase strength, health or speed of all allies at once), Invulnerability with Invincibility Candy, Summoning (Can summon Helpers by directly throwing Friend Hearts to Copy Essences. Can summon a Dream Friend using the Dream Rod), Homing Attack (With Star Allies Sparkler)

Attack Potency: Multi-Solar System level (Easily defeated Meta Knight, seemingly one-shotting him. Unknown parts of that battle weren't seen, but it has been portrayed as him having "defeated Meta Knight in a one-on-one fight"[1]. Fought evenly and lost against 4 Kirbys twice. Able to contend with King Dedede and Kirby in Triple Deluxe, after they defeated a Master Crown-powered Magolor), able to negate durability in some ways | At least Multi-Solar System level (Can assist Kirby & 2 fellow Star Allies in the defeat of Void Termina, Corrupt Hyness, the retaliators Three Mage-Sisters [at once], Morpho Knight EX and the stronger incarnations of Void Termina), Hyness, Morpho Knight and Void Termina), able to negate durability in some ways

Speed: Massively FTL+ (Blitzed Kirby after appearing in front of him somewhat suddenly. "Defeated Meta Knight in a one-on-one fight"[1], which ended on an attack the latter couldn't react to. Kept up with 4 Kirbys in battle and can keep up with King Dedede and Kirby in combat in Triple Deluxe, and can always defend himself from their attacks by reacting to them and blocking them with his sword. Can keep up with fellow Star Allies such as Bandana Waddle Dee, Gooey, Ribbon and the Three Mage-Sisters, and they are comparable to Morpho Knight and Void Termina, with whom they can fight. Along with other Star Allies, he can chase and keep up with the Jamba Hearts several times, which were suddenly scattered across the universe)

Range: Standard melee range with his sword, interstellar with projectiles (Scaling from Kirby), presumably Interdimensional with summoning and protecting himself inside a mirror (Should be using swords from, and hiding within the Mirror World, a realm separate from the universe), Interdimensional with Dimension Mirror

Intelligence: Unknown. Should be comparable to Meta Knight. Possesses vast combat skills due to being able to contend with, and defeat, Hyness and Void Termina

Note: Dark Meta Knight was stated to have been sealed for "aeons" from Amazing Mirror to Triple Deluxe in the Mirror World, which is a mistranslation, although there could have been a time of at least 1,000 years between those games given Queen Sectonia's supposed age, which was measured after she was corrupted by Dark Meta Knight after Amazing Mirror. This would scale to many characters shown before that game, but a confirmation would be needed.

Notable Attacks/Techniques: Note that there is no distinction between his keys in this section.

When collected, Dark Meta Knight becomes invincible for a short time, and almost any enemy he touches will be instantly defeated, or at least damaged.

The Final Weapon in Star Allies, used to take out Void Termina. The Star Allies Sparkler fires projectiles from the tip, fly around quickly and efficiently and spin counterclockwise to avoid all damage on a relative scale (Sparkler Turn). Kirby canonically took the lead in the center of the Sparkler while his friends rode in the tail. Still, the leader can be rotated to imbue the shots with a different element depending on the leader (the technique is called Rider Switch). The Sparkler can fire different homing projectiles with varying power depending on charge time. An uncharged shot is called the Sparkler Comet, and it fires a star-shaped projectile. A charged shot is called the Sparkler Starshot, and it fires a projectile shaped like two intertwining stars. The strongest attack is called Team Star Allies!, which, if everyone who's riding charges together and releases at the same time, fires a giant laser at the opponent. Dark Meta Knight uses this item on his own when used in The Ultimate Choice of Star Allies. 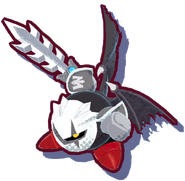